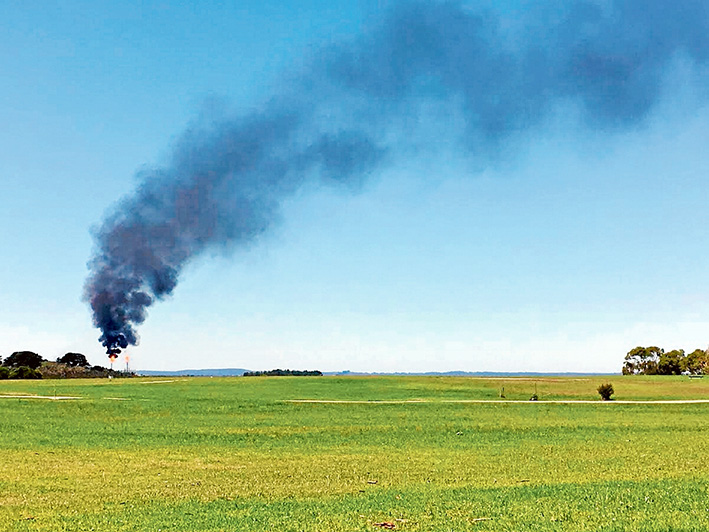 Communications advisor Travis Parnaby said the works – to run 28 January to 22 February – “had [been] carefully planned to minimise impacts on our local community and the environment”.

“However, there will be a necessary increase in flaring throughout the course of these important works.”

The smoke was noticeable on a day of total fire ban.

Readers contacted The News to complain that the unwelcome airborne haze – part of the flaring process – was a “disgrace”.

“I love the Mornington Peninsula for its natural beauty and diversity, but must admit that I’ve been shocked by the degree of pollution from the flaring stacks at Long Island Point,” Leslie Carter, of Hastings, said. “How are these emissions tolerated?”

He had also sent an incident report to the EPA.

Another resident, who asked not to be named, said: “I was stopped in my tracks by a large angry plume of black smoke on what was a total fire ban day”.

“It was in the direction of my home and staining right across the sky and visible from as far away as Frankston and even Dandenong.

“I drove towards home to find it was Esso once again billowing tarry black oily smoke into the air.

“Surely in this day and age an afterburner or filter of some kind could clean up this embarrassment on Hastings township.”

Despite obvious black smoke, Mr Parnaby said the use of the flare “minimises environmental impacts by safely burning excess gas, ensuring it does not escape into the atmosphere”.

That raised eyebrows with the residents: “They have been belching out a steady stream of black smoke, day and night, for weeks now which, in the present weather conditions, can only be concerning for anyone at risk of respiratory disease, or generally alert to the dangers of airborne carcinogens,” Mr Carter said.

“The fact that this plume of acrid smoke also drifts over an acknowledged Ramsar site of special scientific importance should also be a point of shame for those responsible.

“I did a little research online and found out that even in Nigeria – considered to be a Third World nation – the government has pledged to phase out wasteful and polluting flare-burning practises as soon as possible.

“We should expect better of a country with the international status and unique beauty of Australia.”

Esso’s Mr Parnaby said the work was a “key part of our scheduled maintenance program which helps Esso prevent unplanned incidents or disruptions to the plant’s operations”.

He said Esso had “engaged” with Mornington Peninsula Shire, EPA and CFA about the maintenance works.