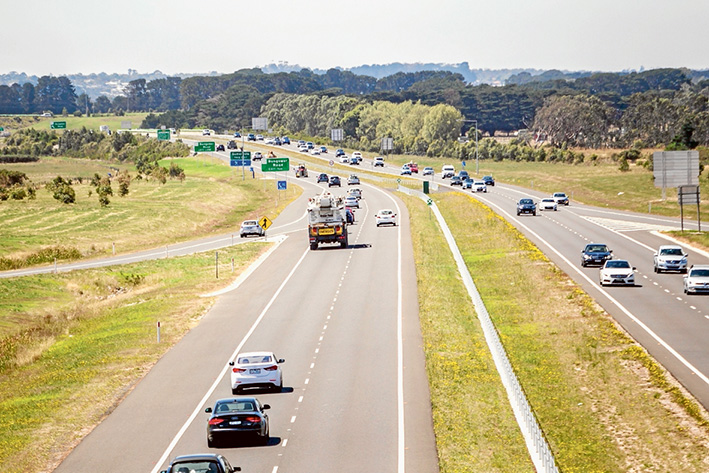 A PENINSULA Link motorist booked for speeding has used his car’s dash cam and satellite pictures to measure the distance between two points to calculate his actual speed – more than 10kph below that stated on his fine.

The calculation will add fuel to the fire of discontent over the dozens of contentious fines meted out to freeway drivers, many of who have joined the Peninsula Link 108 group which is planning a class action.

Allan Tadich‎, of Kilsyth, said he received an infringement notice for doing 112kph as he passed the Loders Rd static camera on 22 December.

“This seemed incorrect as I had my car’s cruise control set at 100kph,” he said.

“Fortunately, I had the dash-cam on and was able to review the footage later.”

Determined to prove the camera wrong, Mr Tadich used his dash cam and Google Earth to identify two easily recognisable points and cross referenced them. He then calculated the elapsed time taken to drive between the two points to within 0.5 of a metre.

Using the formula speed equals distance divided by time he was able to calculate his actual speed at 101.5kph plus-or-minus 0.5kph.

“I have used this as the basis of my appeal and am calling for an internal review.

Late Friday, Mr Tadich received some good news: The officer in charge of the traffic control branch had agreed to suspend his infringement pending “further investigation”.

Mr Tadich said to be clocked supposedly at 112kph meant he could have been driving as fast as 115kph, using the plus-or-minus 3kph built into the cameras.

He says this is ridiculous. “I have a high level of confidence that they are clearly wrong,” he said.

“The static camera at Loders Rd has not been tested for 11 months and so, surely, is due for recalibration.”

Cameras usually are tested every 12 months, meaning this camera is due for testing this month.

He said a speed of 115kph would have been picked up by the point-to-point cameras, which calculate a car’s average speed over a certain distance.

“We have analysed a substantial amount of data, but there is still more to go through,” he said. “We have received 96 complaints at this office, plus 12 that were received before the [Police] Minister [Lisa Neville] requested the investigation.

“We are most certainly carefully looking for where a problem could be. This involves carefully scrutinising every aspect of the road safety camera system along the Peninsula Link freeway.”

Mr Voyage admitted there was a “substantial number of people who have informed us of their concern about the 108kph which they are alleged to have been travelling”.

“However, there are also a number of other speeds which are popping up among people who assert that the reading is wrong.”

He said he wanted to quickly finaIise his investigation.

He had “repeatedly invited the public to provide dash-cam footage or GPS data of their trip or FineMate app tracking (“Speed check app for Link drivers” The News 20/12/16), or drivers of trucks with speed limiters”.

Peninsula 108 group member Jarrod Salmon is emailing complaints to Mr Voyage. “I have quite a few to send off to the commissioner and spoke to him today regarding all the emails coming his way,” he said.

He paid up without a fuss – but that was before a slew of 108kph fines drew the cameras’ integrity into question.