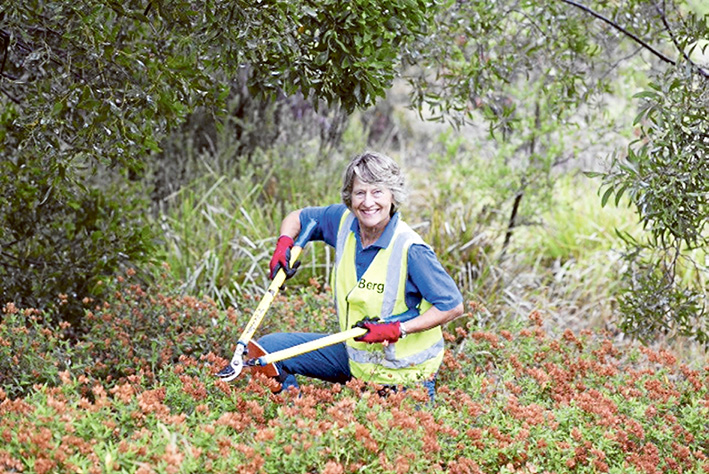 SHE is the Lady of the Lake – or more accurately – a saviour of Mt Martha’s Balcombe Estuary.

Liz Barraclough, OAM, a founding member of BERG Mt Martha 20 years ago, has devoted much of her life to protecting and improving estuary, its plants and wildlife.

Instead of brandishing a sword, Ms Barraclough is most often found wielding a pair of garden shears to fight weeds invading bushland adjoining the estuary.

Over the past two decades she has attacked countless weeds and noxious plants, bagged and loaded truckloads of green waste for disposal, prepared the ground for revegetation, spread hundreds of tonnes of mulch and planted thousands of indigenous seedlings.

As BERG project officer on Sunday 12 February she was overseeing the group’s first working bee of the year.

The goal was to remove rock rose (Cistus psilosepalus) and flaxleaf broom from the hillside running down towards the lower reaches of Hopetoun Creek, a major tributary of Balcombe Creek.

Thirty years ago, Ms Barraclough was a physiotherapist, but decided to study horticulture at Burnley to allow her to follow her lifelong interest in gardens and the Australian bush. It also gave her flexibility to spend time with her four children.

About this time she began to work as a volunteer with the bushland restoration crew of Greenlink, an indigenous plant nursery in Box Hill.

Her horticultural skills were a natural asset for the fledgling BERG Mt Martha, but Ms Barraclough proved more valuable.

Her colleague and friend Angela Kirsner, who is also editor of the group’s newsletter The Creek, says Ms Barraclough was instrumental in organising  grants.

“Almost single-handedly, she raised over half a million dollars of grant money.”

Ms Kirsner said said she also mastered the increasing levels of technology involved in grant submission, mapping, planning and record keeping. She also made it her business to become an expert in environmental management, building on her training in horticulture.

“She took up every workshop and training opportunity and made sure others had access to the same opportunities,” Ms Kirsner said.

“She has also proved a highly valued educator, working regularly with local schools as well as with environmental studies students at Deakin University.”

In recognition of her service to conservation and the environment and as a volunteer educator, Ms Barraclough was awarded an OAM in 2015.

Ms Barraclough said that BERG had improved and increased the quality of the indigenous vegetation and therefore the habitat of an important wildlife corridor.

“Without an active BERG MM, there would have been a continuous deterioration of the reserves and possible encroachment of housing and sports fields,” she said.

“BERG has increased the community’s awareness of this unique waterway and surrounding natural environment.

“It would be a tragedy to lose this.”