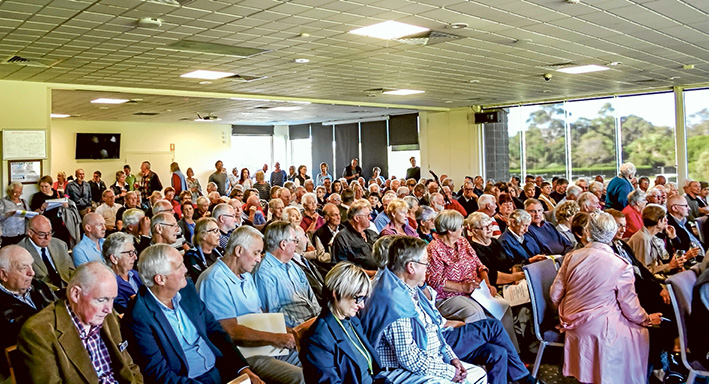 THE Law and Order forum at the Rosebud Country Club last week was described as being an “extraordinary response from the community to discuss their feelings and concerns about the dramatic increase in crime we are seeing across the state and on the Mornington Peninsula”.

Nepean MP Martin Dixon said about 250 people were at the club on Tuesday 14 February to “vent their anger at a legal system which has largely left victims of crime behind, while it acts to defend criminals”.

One outcome of the meeting was to create a community consultative group to distil the information outlined at the forum for Mr Dixon to then present to parliament and to the state government.

“There was great support for this group from a diverse representation, including retired police, JPs and other community members experienced in law and order issues,” he said.

The consultative group is expected to meet in the next few weeks.

Mr Dixon said those attending the forum made it clear they were concerned at the lack of penalties for breaching bail, at the increase in violent crime – with a carjacking reported in Rye – and at the delays taken for police to respond to 000 calls.

“If elected in 2018, a Coalition government will address these issues with firm laws dealing with bail breaches and criminals who perpetrate violent crimes while, at the same time, ensuring police have the resources to respond promptly to all 000 calls. Enough is enough, was the message heard loud and clear,” Mr Dixon said.

Anyone interested in joining the consultative group can call Mr Dixon’s office on 5986 6661.