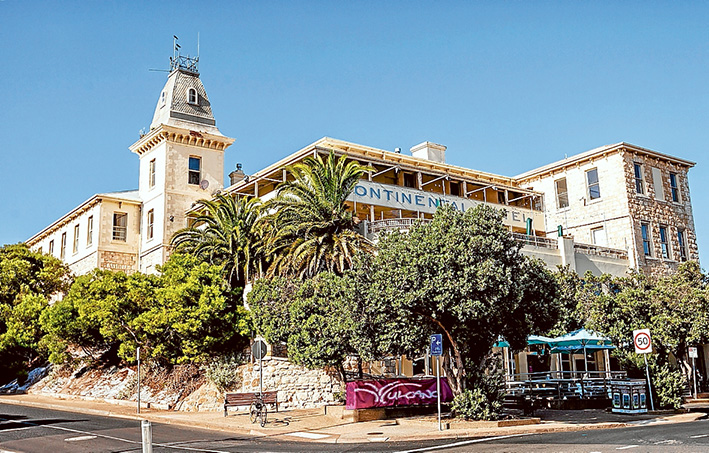 CONTINENTAL Hotel proprietor Julian Gerner is upbeat after the Victorian Civil and Administrative Tribunal agreed to change conditions imposed by Mornington Peninsula Shire Council on apartments he wants added to the 1875 landmark.

VCAT presiding member Michael Nelthorpe said the tribunal did not believe the building’s height needed to be reduced to ensure an acceptable planning outcome or that Mr Gerner should pay $125,000 towards a pedestrian crossing.

Controversy raged over the council’s handling of the planning application last July, including the sale of public land for a carpark for $1.8 million.

“This really is the death-knell for this historic coastal town,” she said.

“It’s not the fault of VCAT; the blame lies with the shire as they granted the permit for development.”

Mr Gerner, who bought the hotel for what is believed to be around $15 million in July last year, also runs restaurants and a wine store opposite the Sorrento foreshore.

He said he would “absolutely see through” the planned development now that approvals have been received.

“We took the case to VCAT and are pleased they found in our favour,” he said. “I’ll have to start raising the money now but, mostly, my part is done for a while.

“The finance side is far too technical for me and will be done by others. Works will start when [the project] is fully funded.”

Dr de Jong said the shire had been “unsatisfactory” in explaining its case to the tribunal.

“The 37.05 metre height limit [of the apartments] was actually critical – as this meant that they would sit below the roof ridge of the Conti,” she said.

“In the end, it was all over one metre in height. VCAT thought that was insignificant.  The council tried to defend its permit condition of limiting the height to 37.05 metres. Its legal team did as well as they could but had nothing to go on.”

Dr de Jong said the conservation group tried to establish the “critical nature of the hotel as a landmark with reference to the whole area – not just the corner of Constitution Hill and Ocean Beach roads”.

“I argued that Sorrento was a village and not the place for major development,” she said.

“The town faces major planning issues: As some say, we are fast becoming a Chadstone by the sea.”