By IT GullyFebruary 27, 2017No Comments4 Mins Read 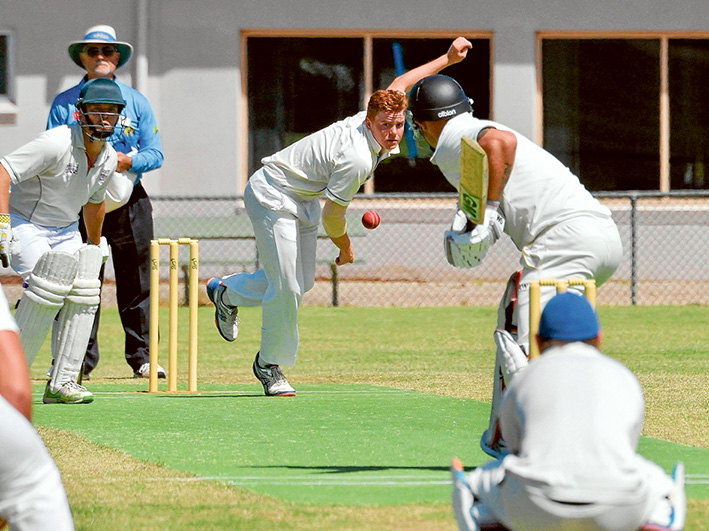 LANGWARRIN is equal top of the MPCA Provincial ladder after coming from the bleachers to knock over Mornington in the final two-day game of the home and away season.

Chasing 211 for victory at Alexandra Park, the Kangas resumed at 2/10, chasing the Doggies’ total of 210.

Things become worse very quickly for the Kangas at the beginning of day two when Mitch Bromley was removed after just five runs were added to the overnight total (3/15).

Matt Prosser and skipper Trav Campbell steadied things down and got the score to 93 before Mornington quick Michael Heib struck again.

When Tay Smith was gone for a blob and Prosser went a short time later, the Kangas were in some real strife at 5/108.

The visitors then dug deep again, Jake Prosser and cousin Joel Bateman hitting 39 and 32 respectively to give their side some hope for the first time in the innings.

When Bateman went, the score was 8/194 with plenty of overs to play and the Kangas were in the box seat.

The evergreen Mal Coutts (24 not out), together with Matt Campbell, picked up the 15 runs required for victory.

Langwarrin’s wins over the past two matches against fourth-placed Mt Eliza and now fifth-placed Mornington gives them a 20-point buffer in third place. The Kangas are only percentage from top spot.

Peninsula Old Boys and Baxter gave a taste of what to expect in the finals starting in a fortnight after playing out a terrific match at Greg Beck oval.

POB then started its mission to hunt down the runs in 82 overs – it achieved the objective in 75 overs and with five wickets in hand.

Skipper Matt Hyden top scored for the Old Boys with an unbeaten 57, Glenn Prendergast hit 49 batting at four and Jon Forrest was not out 31.

Dale Irving was the pick of the Baxter bowlers with 2/36 from 15 overs.

Crib Point is still a outside chance of making finals after smashing Pines.

The Magpies resumed at 3/24 chasing 136 with Duane Annable and Luke Herrington at the crease.

The Pies must beat POB this weekend in the final game of the season (one-dayer) and rely on Somerville to beat Mt Eliza and Moorooduc to beat Mornington to make the four.

In reply, the Sorras were rolled for 85 with Mark Dunball top scoring with 19.

With 41 overs still left in the day, the Sorras were sent in again but withstood the onslaught and finished at 1/42.

Pearcedale picked up the 12 points against Somerville.

Chasing 127 for victory, the Panthers had its sights set on an outright and got the runs three wickets down off just 44 overs after Chris Dew hit 62 and Will Kennedy 51, while Kaine Smith chipped in with 42 at the end.

The Eagles were 4/131 in their second innings, preventing an outright win to the Panthers.