Adam Brand will get you on your feet 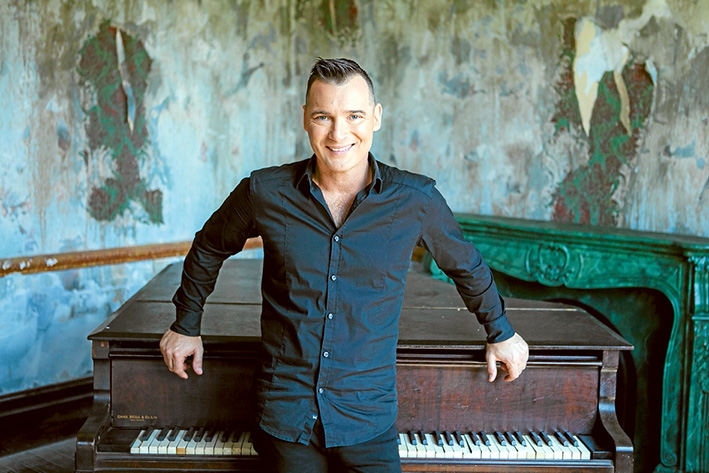 There’s a revolution happening in the world of Adam Brand. It’s a creative revolution that sees Brand redefining boundaries and returning with the most ambitious record of his career, GET ON YOUR FEET. The album pushes the envelope in a way that few country artists of the modern era have ever attempted. This is Adam Brand in 2017, and he’s bringing a full deck of fine songs to the party that will establish a new high-water mark for him in a career that is already rich with them.

With a new genre pushing record that’s set to send critics and fans reaching for new superlatives, Brand remains one the giants of modern Australian country music. One of country’s few contemporary icons, Brand has built a career that has seen him sell over half a million CDs and DVDs while earning three platinum and five gold albums. His catalogue includes such seminal albums as Last Man Standing, Adam Brand, Get Loud, Blame It On Eve and It’s Gonna Be OK.  Throughout his career Adam Brand has been recognised internationally – particularly in the USA. He has an admirer in Taylor Swift – who hand picked him to tour with her in 2011. Brand has been nominated four times for the ARIA Best Country Album award and has won a dozen CMAAs (Country Music Awards of Australia) including multiple wins in the Song of the Year and Male Vocalist of the Year categories. Adam has won twelve Golden Guitar Awards. He is also the series winner of Dancing With The Stars.

Still, the one thing that continues to define Adam Brand ‘the artist’ is his desire to evolve and move forward. Blazing a sonic trail fuelled by what is happening right now in music, GET ON YOUR FEET is a stellar return for the artist.

GET ON YOUR FEET was recorded between Nashville and Sydney and features a collection of songs destined to become radio favourites. Immediate highlights include the title track and first single ‘Get On Your Feet’ (with the killer line ‘let’s party like the bomb just dropped’), ‘When You Get Lonely’, ’When She Walks By,’ ‘Heaven Has A Soundtrack’ and ‘Leave It On’.

Adam has been collating material for GET ON YOUR FEET for as long as it took him to find the best possible songs. Before beginning work on the album, Brand enjoyed a hugely successful tour with his mates under the guise of Adam Brand & The Outlaws. The group ‘set fire to the town’ night after night. As their popularity continued to build, Brand was considering his next move back to his natural habitat as a solo perform-er.

“After My Side Of The Street (An ARIA Top 5 in 2014 – for which he won CMC Artist of the Year) came out, I felt like I needed to do something fun and different. The Outlaws was a nice segue. The idea had been in my head for years. I wanted a break from being ‘me’ …” he explains.

“I knew I was ready to make a new record. I was looking for great songs that I wanted to sing. Every song had to be a song that I wanted to press ‘repeat’ on when I was driving in the car.”

Working with Nashville based songwriters Erin Enderlin and Alex Kline (Enderlin has collaborated regularly with Brand throughout his career) – the search for top shelf songs was undertaken with gusto. Adam admits he gave a hundred and fifty tunes a spin and was smitten with around twenty of them. GET ON YOUR FEET features the best of the best. Ten songs made the final running order. This album really is all killer and no filler.

“I’d been collecting these songs for twelve months,” Brand admits, “I know them really well and I’ve never gotten sick of them. I still wanted to keep listening to them even after I’d played them for the 100th time. ‘Every Time She Walks By’, ‘Get On Your Feet’, ‘Heaven’, ‘Drunk’ … ‘Why Can’t Love Be Easy’. I’ve been singing along to those songs like a fan in my car since mid-last-year.”

With the material written and recording sessions completed in Nashville, Adam cut his vocal parts with Ted Howard (Paul Kelly/Yothu Yindi) at Rancom Street Studios in Sydney. The result sees Adam Brand return with an album that will redefine his place in the country music pantheon.

It’s time to GET ON YOUR FEET.

Adam Brand will be playing at The Grand Hotel, Mornington, on Friday 28 April.