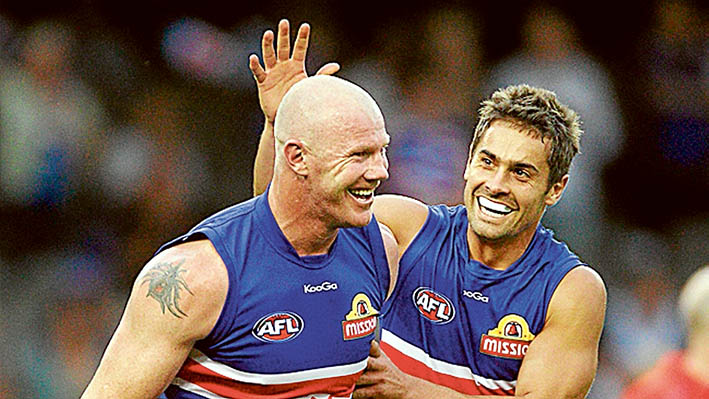 Barry to pull a crowd: Barry Hall, pictured (left) playing for Western Bulldogs, is sure to pull a crowd when he laces up the boots on the peninsula. Picture: Supplied
Share
Facebook Twitter LinkedIn Pinterest Email

TWO AFL premiership players will be coming to the peninsula in April to play a few matches for local Nepean League football teams.

The Pearcedale Football Club will have the ex-AFL stars Daniel Kerr and Barry Hall joining their line-up for a couple of one-off matches at the start of their season.

Kerr, 33, spent his entire career at the West Coast Eagles and helped take the side to a one-point victory in the 2006 AFL grand final.

Kerr will play his first match for the Tyabb Football Club on 01 April before slipping on the boots a week later for Pearcedale in the opening round of the Nepean league.

Having felt the dominance of Brendon Fevola at full forward in last year’s Good Friday match against the Frankston Bombers, Pearcedale are hoping to turn the tables with Barry Hall joining the team and towering up front in the Good Friday clash on Friday 14 April.

Hall, who has played for St. Kilda, the Sydney Swans and the Western Bulldogs, has had a remarkable career including captaining the Swans to their 2005 AFL grand final victory.

“We are really excited to have them join us. Hopefully they’ll inspire the juniors as well as some of our own players,” Pearcedale Football Club president, Margaret Brown said.

This year the Dales will have the privilege of hosting both matches at Tractor Park, Pearcedale.

“They’ll be here for the day and Daniel Kerr will be giving a talk afterwards and Barry Hall will be talking at the luncheon and signing autographs,” Brown said.

Tickets to the functions are available from the club.