Eels look to moon before next move 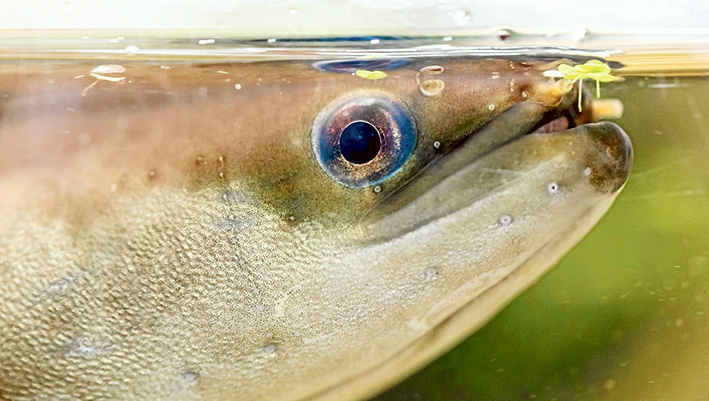 Coming of age: Ageing short-finned eels in creeks and dams across the Mornington Peninsula are readying themselves for the final journey of their lives to their breeding grounds in the Coral Sea. Picture: Yanni
Share
Facebook Twitter LinkedIn Pinterest Email

IT IS the great mysterious love story of estuaries and creeks across the Mornington Peninsula that has its beginning and end 4000 kilometres away in the Coral Sea.

Short-finned eels (Anguilla australis) live in or around the waterways for 10 to 20 years, maybe longer, growing up to one metre long and as thick as a man’s arm.

Nobody seems to know how often, but around the full moon on an Easter tide they burst out of the estuary in their thousands to return to the Coral Sea to mate and die. And the cycle starts all over again.

According to research compiled by BERG Mt Martha, the eels are probably born in or near the deep water of the Coral Sea, north of New Caledonia.

Larva, called leptocephalus and looking like a small willow leaf, drift with the currents towards Australia and over the continental shelf.

A metamorphosis happens – the leaves take on the shape of eels, but are transparent – glass eels. Pigment is confined to their backbone and eyes.

The glass eels continue to ride the currents along the coast, but they don’t feed.

When they smell fresh water, they head into rivers and creeks.

Some end up in Port Phillip and head to Balcombe Estuary at Mt Martha and Tanti Creek, Mornington.

Before going upstream, they undergo another transformation. Glass eels become pigmented elvers, at the same time shrinking in size and developing a digestive tract.

Some go upstream, finding their way into ponds, dams and drains. They can climb waterfalls and dam walls and slither over wet grass into dams.

Generally these become females and remain in the habitat for 10 to 20 years.

Those that stay in the lower reaches of the creek tend to be males.

When the dams overflow, usually in spring, the mature females migrate downstream to join males in the estuary.

They spend some months adapting to the higher salinity before leaving the coast.

Typically, the mature males leave Balcombe Creek when the first stormy weather breaches the sandbar at the mouth of the creek.

The females leave soon after.

By the time they leave, they have undergone another metamorphis: their digestive organs have shrivelled as they have stopped feeding.

And their eyes have enlarged to enable them to see deep below the ocean’s surface.

They will depend on their oil reserves for the long journey to their mating grounds.

Although never tracked, it is deduced that the mature eels, helped by sea currents and swimming at depth, return to their birthplace, about 4000km away.

“We don’t know how often the migration occurs, yearly or every two or three years,” John Inchley of BERG said.

“Two years ago, one of our members took a video on her phone of the eels bursting out of the estuary to start their epic journey.

“So it may be this year again, or next year. We don’t know what the cycle is.”