Pier fix must wait out winter 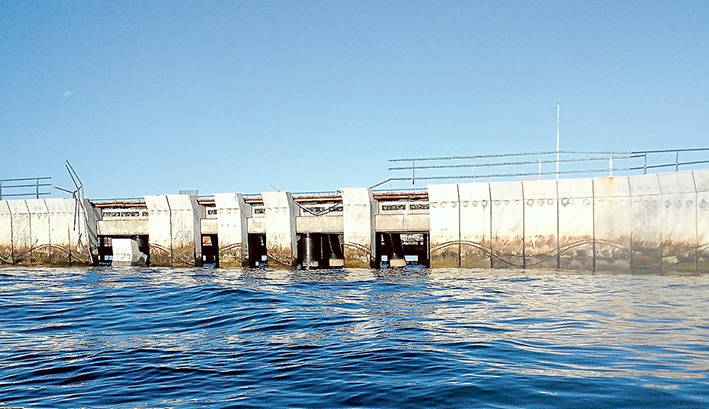 Under repair: Slabs of concrete have been dislodged from Mornington pier, above (Picture: Bill Robinson), which has been closed to the public until further notice, below. (Picture: Jarryd Bravo)
Share
Facebook Twitter LinkedIn Pinterest Email

A WORKS barge and hydraulic crane will this week be used to remove five of Mornington pier’s storm damaged concrete wave protection panels.

In January, the Carrum Downs-based contractor removed loose wave panels, created a safe walking surface on the damaged pier deck and laid a temporary pier edge fence so the damaged area could be re-opened.

While the barge is being brought in to remove the damaged panels ahead of any winter storms their replacement will have to wait until a suiotable weather window between December and next April.

“Significant planning progress has been made towards strengthening the pier infrastructure so that when the wave attenuator infrastructure is re-installed the community can have confidence that it will stand up to future storms.”

Wild weather last October forced the pier to be closed after storm surges tore off 10 concrete wave panels, lifted timber decking and knocked down handrails. Nine panels had been dislodged in July and handrails torn down.

She said Parks Victoria “continues to have confidence in the pier itself, which is structurally sound” despite the failure of the wave attenuators.

Mornington MP David Morris said the pier was in “probably the most difficult location on Port Phillip”.

“The combination of deep water and a highly exposed position means that the impact of any adverse weather conditions is often felt harder at Mornington than any other point around the bay,” he said.

“But the extreme conditions are well known to both Ports and to Parks Vic who oversaw the design of the new pier and managed the works.

“It was therefore disappointing that there was apparently a problem with the wave screens that led to the damage that occurred in July. It is not yet clear to me whether the failure was due to a design flaw or to a problem with the contractor’s implementation.

“Whatever the cause of the failure, it should have been fixed long before now. The most recent damage has apparently occurred because of the absence of the wave screens damaged in July.”

The 1.2-metre-thick reinforced concrete deck is supported by 100 steel piles driven 20 metres into the seabed.