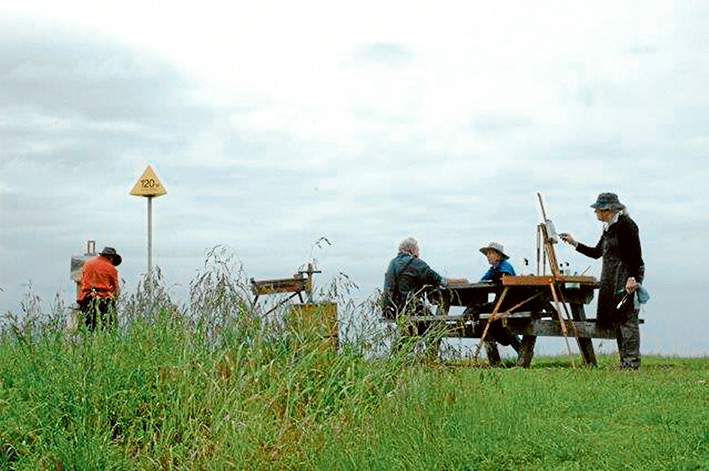 WORKS by the late Mt Martha artist Rudi Fuchs will feature at the Peninsula Plein Air Painters annual exhibition and sale at Sorrento over Easter.

Fuchs, 88 who passed away last December, was born in East Germany where he trained in art and won the prestigious Weimar scholarship before escaping to West Germany in 1946.

He arrived in Australia in 1953 and tutured art across the Mornington Peninsula with David Taylor and Robert Wade throughout the 1960s and was a long time member of the Peninsula Plein Air group.

The exhibition is being held at the Sorrento Activity Centre from 14 April.

Members of the Peninsula Plein Air Painters prefer the great outdoors to produce their works from Millionaires Walk to Cape Schanck and Arthur’s Seat to Mothers Beach, Mornington.

The group has also been to Lorne and Falls Creek for several days of painting, wining and dining.

Plein air painting originated through impressionists such as Monet, Pissarro and Renoir and later masters such as Guaguin and Van Gogh

Doors to the exhibition open at 10am on Good Friday at Sorrento Activity Centre. The show will open 10am-4pm daily over the four days. The official opening is at 7pm on the Friday night with wine and nibbles provided. Admission is $3.

Sorrento Activity Centre is on the corner of Melbourne and Queens roads, Sorrento. Details: Maxine Wild, 5985 5770.