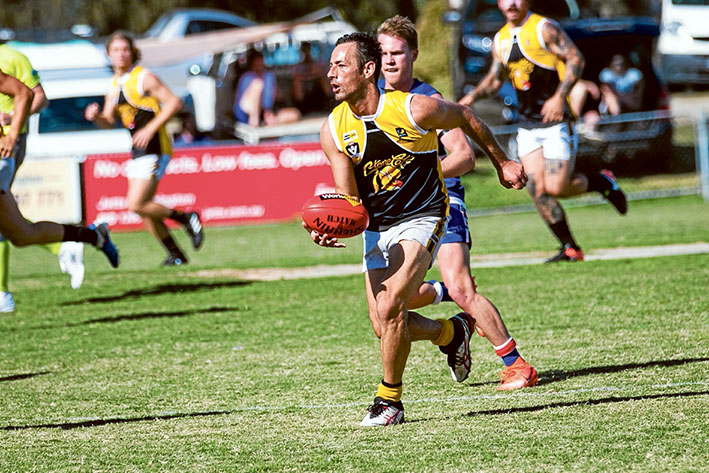 A MORE even MPNFL Peninsula Division competition this season may not necessarily be in store after Frankston YCW flexed its muscles against Mornington on Saturday.

The reigning premiers were sluggish out of the blocks though, completely outgunned from the opening bounce as the Doggies booted six goals to one in a dominant first stanza with the aid of the breeze.

At the first change, the margin was 29 points and the Doggies were in control.

Fast forward 30 minutes, Frankston YCW kicks nine of the next 11 goals and turns a 29-point deficit into a 16-point lead.

The Dogs only booted five goals after the first change while the Stonecats managed 13 more after the slow start.

Jackson Calder finished the match with four goals for the Dogs while Emilio Bitters and Joel Miller were outstanding contributors.

The Mounties were average during the pre-season but saved itself for the real stuff as it had 11 scoring shots to one in the opening quarter — the game should have been over at that point.

Shane Tennant was superb for the Redlegs in his first game while former Karingal ruckman Grant Goodall and Rohan Heasley were able to combine well around the stoppages.

Jackson Mockett booted three for the Tigers while Tom Shaw booted two in his return game after a couple of seasons at Somerville.

Inaccurate kicking is bad football and Langwarrin was guilty of that on Saturday against Karingal.

The Kangas had 20 scoring shots to 16 but lost the match by 11 points in what was a scrappy and uneventful affair.

Eight goals to three in the second and third quarters were enough to get the Bulls over the line at Lloyd Park, eventually winning 8.8 (56) to 5.15 (45). The home side booted seven behinds to Karingal’s zip in the last quarter.

Michael Burke showed no signs on slowing down for the Bulls and Damien Ashcroft proved he is going to be a good get for the club, while Michael Parker, Gerard Brown and Shane Paterson were the best of the Kangas.

Pines was able to hold off Bonbeach to win its opening game of the season by 17 points.

Only five points separated the sides at three-quarter time at Bonbeach Reserve before Pines booted two straight goals and kept the Sharks scoreless in the last to win 10.9 (69) to 7.10 (52).

Tim Bongetti booted four for the Pythons and Shane Waterstone booted three while Guy Hendry was superb down back.

Owen Hulet and Jackson Casey were the best of the Sharks.

With the aid of the breeze, the Eagles set up the win with six goals to one in the third and then kept the opposition scoreless in the final quarter.

Mick Meehan finished with four goals for the Eagles while Will Flavelle was lively with three majors.

Recruit Michael Bussey arrived with big wraps and delivered with two goals and was one of the best players on the paddock.

Simon Mitchelhill impressed in his first outing for the hoops, Aaron Pawel performed well against his old side and Jack Francis was solid.