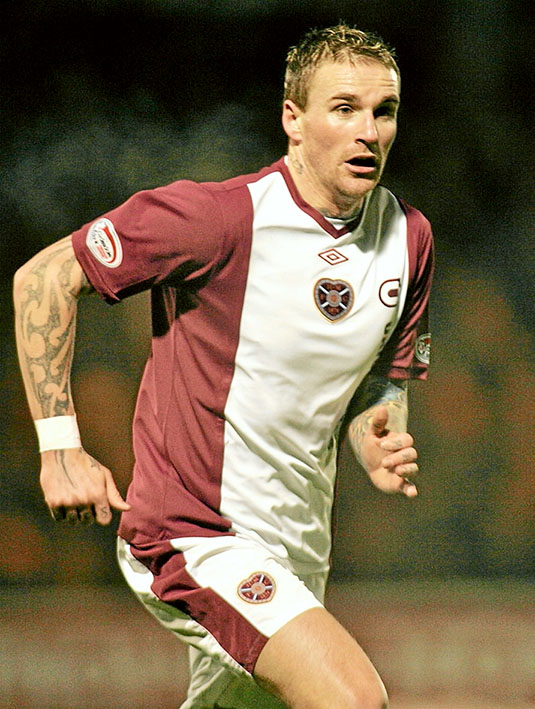 Peninsula Strikers have pulled off the transfer coup of the season by clinching the signature of Scottish star Ryan Stevenson.

The 32-year-old attacking midfielder or striker has played over 400 games as a professional in Scotland and England and will fly to Melbourne as soon as his visa and international clearance are arranged.

The Centenary Park outfit is hopeful that Stevenson will arrive this week and be the first of a number of clutch signings it hopes to make in the next fortnight.

Among them is former Bentleigh Greens junior Emmanuel Brima, 18, who has been training with Strikers after recently returning from a 12-month involvement with AC Milan’s youth system.

English central defender or right back Michael Nugent is expected to train with Strikers this week and former Langwarrin midfielder and current Cilfton Hill player Sam Scott is firmly on Strikers’ radar.

The club is in talks with two other local players but it may take another couple of weeks before they reach a decision.

The local game has rarely seen such an influx of visa players and Strikers have outdone every other club in the area with the capture of Stevenson.

“I was talking to a former teammate a few weeks back and Ryan’s name cropped up so I decided to contact him through facebook and he responded straight away so we’ve been on the phone almost every day since,” said Strikers’ gaffer Craig Lewis.

“He was really keen from the outset and told me that he’s got a mate who came over a couple of years back and told him that it was the best move he’d ever made and that he should get over here the first chance he got.”

Stevenson is from the former mining village of Drongan in Ayrshire and began his professional career as a youth player with English giant Chelsea.

He returned to Scotland in 2002 and joined St Johnstone before switching to Ayr United, initially on loan before making the move permanent in 2007.

In 2010 Stevenson started the first of two spells at Hearts, joined English outfit Ipswich Town in 2012 then transferred back to Hearts that same year.

Since then he has had stints with Partick Thistle, Ayr United, Dumbarton and Raith Rovers and ended his professional career last month when he signed for Troon in the West of Scotland Super League Premier Division.

Stevenson’s professional career highlights include scoring both goals in Hearts’ 3-2 loss to St Mirren in the 2013 Scottish League Cup Final, scoring for Hearts in wins over Glasgow giants Rangers and Celtic and Edinburgh rival Hibs and being called up to the Scotland squad in 2011 for a friendly against Cyprus.

The thought of Stevenson linking with ace striker Aziz Bayeh is a mouth-watering prospect for Strikers’ fans and if the club is successful with its other targets it will have a formidable line-up.

“We know what we want to achieve this season and we’ve got off to a terrible start and need to strengthen,” said Lewis.

“We want to turn our season around and I’m confident that we can.”

Strikers lost their third straight game of the State 2 South-East season when they went down 6-3 away to Doncaster Rovers on Friday night with four individual errors leading to Rovers’ goals and underlining the need to add to the squad.

Pines started with new signings Alex Akrivopoulos from Mazenod and Dion Brown from Peninsula Strikers on the bench and created the clearer chances in the first half with a new look front three of Matty Davies, Jack Wrobel and Ioasa Saemo.

Seven minutes into the second half Jack Wrobel gave Pines the lead when he slotted the ball under Berwick keeper Christian Morales.

Berwick pressured Pines in the last 20 minutes and the visitors thought they had held on until a corner in the 95th minute which went to the back post and was headed back across goal where former Pines striker Orlando Meijas tapped in to make it 1-1.

Pines assistant coach Paul Williams took charge of the senior side against Berwick as head coach Billy Rae was attending a family wedding.

Pines vice president Daniel Plaiche is spending the Easter break in his native Mauritius and is confident that he can negotiate international clearances for Christopher L’Enclume and Cedric Pernal.

It is believed that L’Enclume’s club is asking for a transfer fee for the Mauritian international and Plaiche wants to meet with club officials to explain that L’Enclume is in Australia on an education visa and plans to play as an amateur at Pines.

The success of Plaiche’s visit is crucial to Pines’ plans to bring out more Mauritian internationals later this season.

Langwarrin supporters are in good spirits after the late, late show at Warner Reserve enabled the club to celebrate Gus Macleod’s 400th league game in charge with a 2-0 away win over promotion rival South Springvale last weekend.

The result entrenches Langy on top of the State 1 South-East ladder and goals to Caleb Nicholes in the 89th minute and Alex Metcalfe in the 93rd minute sealed the victory.

English central defender George Whiteoak arrived in Melbourne late last week and played in the reserves but looks certain to be in Langy’s matchday squad for its next game.

Mornington hit the front in the 19th minute when Ryan Paczkowski pressured the Manningham keeper following an inswinging corner from Nathan Smith and bundled the ball over the line.

Scores were level in the 27th minute thanks to a superb free kick from Anton Nardella but later in the half Nardella received a straight red after being involved in a scuffle.

The decisive moment in this contest came in the 80th minute when Mornington keeper Kris McEvoy could only parry a firm shot and Matthew Infantino’s low first time strike from close range made it 2-1.

Both sides ended up with 10 men following Jack Truelove’s dismissal in the final minutes after receiving a second yellow card.

Mornington is running out of time to get star recruit John Hine from English club Salford City over here. Hine has ongoing problems arranging a visa.

“If he’s not here in the next couple of weeks we’ll have to look elsewhere but we were very poor against Manningham and we need to do something about that,” said Mornington coach Adam Jamieson.

The storm that hit Melbourne on Saturday afternoon played havoc with fixtures and three local clubs had their matches abandoned.

Skye United was 2-0 down at home to Brighton when it’s State 3 South-East game was abandoned in the 47th minute.

The Doveton v Seaford United game at Waratah Reserve was called off after 72 minutes with the Doves leading 3-2 and Somerville Eagles were drawing 0-0 at home against Casey Panthers when their clash was abandoned in the 75th minute.

Rule 4.2.3a of the 2017 rules of competition states: “If 80 per cent or more of normal time of a competition fixture has been played then the score at the time of abandonment may stand. ‘Played’ in the context of this rule will be determined by FFV with reference to the match official.”

In other words FFV will decide whether or not the result stands.

Harry McCartney reports that Seaford blew a 2-0 half-time lead against the Doves after a Dylan Waugh header in the 26th minute and an Alex Roberts strike in the 43rd minute put the visitors in the box seat.

A low strike from Senahid Tokalic in the 53rd minute made it 2-1 and scores were level after a Nick Ormond own goal in the 66th minute.

Scott Webster made Seaford pay for a defensive blunder in the 70th minute to make it 3-2 but the match was called off shortly after.

While FFV may let the Seaford and Somerville results stand it is expected to call for a replay in the Skye v Brighton game which probably accounts for Skye officials talking up the threat of more lightning as the referee waited in vain for the storm to abate.

Skye’s players can consider themselves extremely lucky if FFV rules in favour of a replay after their spiritless, lazy performance last weekend.

Baxter lost 1-0 away to Bayside Argonauts in their State 4 South fixture on Saturday.

The home side had the better of the first half but the deadlock couldn’t be broken and Baxter dominated for long periods of the second stanza but couldn’t score.

In the last 15 minutes big Dan Disseldorp’s shot struck the post and not long after teenager Travis Ernsdoerfer ended a great solo run by also hitting the upright.

In the 88th minute Owen Kilner unleashed a volley that slammed off the crossbar and a minute later Bayside’s Sam Langford decided the issue with a fine finish following a good move down the left.

Turner is also believed to be in Skye’s sights.

Rosebud Heart had to settle for a 1-1 away draw with Noble Park on Saturday.

Just two minutes in and Heart was on the back foot after a long ball over the top enabled Noble Park’s Daniel Paunov to nip in and poke the ball home.

But Heart hit back in the 32nd minute when star striker David Greening turned Noble Park’s central defender inside out then finished superbly to make it 1-1.

Heart controlled the contest after the interval despite playing into a fierce headwind and created four good chances in the final 10 minutes but failed to convert.

“It was one of the most frustrating games I’ve been involved in as we dominated but couldn’t get the win,” said Heart senior coach Scott Morrison.

“The performance was superb and was the type of form we showed all last year so hopefully we can go on now and get the results we deserve.”

Daniel Hodge (tonsillectomy), Beau Sharpe (wedding) and Chris Sibson (back injury) were unavailable but all three should be back for Heart’s next league game on Saturday 22 April.

There are no matches scheduled over the Easter weekend.