Search for top taste on peninsula 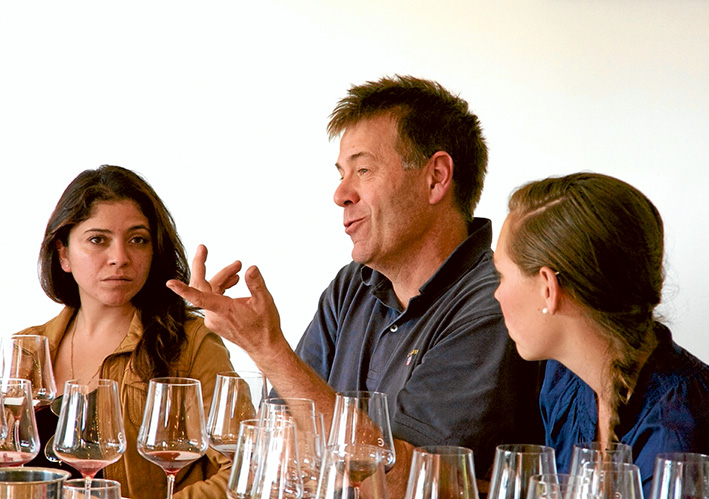 Wine talk: Sommeliers on a tour of Mornington Peninsula wineries arrive at Crittendens Wines, Dromana, below, where they tasted and learned about wines from winemakers, including, above, Mike Symons, of Stonier Winery, Merricks.
Share
Facebook Twitter LinkedIn Pinterest Email TWENTY experts who buy and recommend what wines are served in some of the world’s top restaurants were last week taken on a tour of Mornington Peninsula wineries.

The marketing exercise organised by Wine Australia saw two busloads of sommeliers being driven around the peninsula on Tuesday and Wednesday.

The sommeliers were in Melbourne for The World’s 50 Best Restaurants awards which saw New York’s Eleven Madison Park take out the top spot.

Tuesday’s tour of the peninsula started at Stonier Winery, Merricks, where the group was welcomed by Mornington Peninsula Vignerons Association CEO Cheryl Lee.

From there the sommeliers from the United Kingdom, United States, New Zealand and interstate went to Ocean Eight, Shoreham and then to the top of Arthurs Seat before having lunch at Petit Tracteur, Main Ridge.

The final stop for the day was at Crittenden Wines, Dromana, where they tasted nine wines and were told about production methods and differences between vineyards where they were made by winemakers including Rollo Crittenden (Crittendens Wines), Martin Spedding (Ten Minutes by Tractor), Kathleen Quealy (Balnarring Vineyard) and Glen Hayley (Port Phillip Estate).