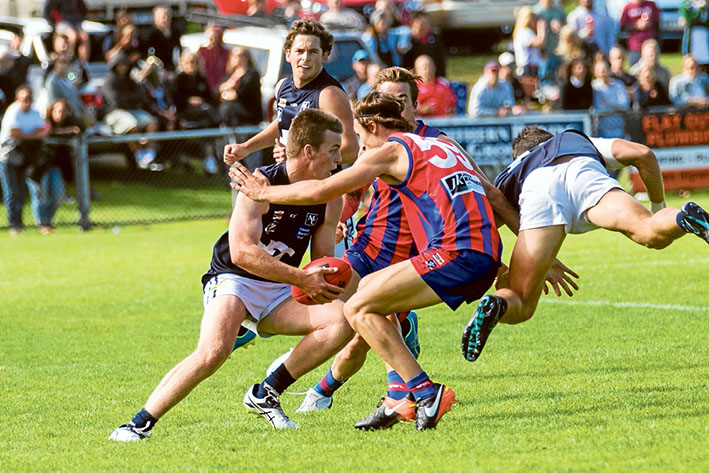 ‘Big, bad, bustling’ Barry lived up to all the hype and excitement, putting the Dales in front after converting a right foot snap with less than a minute left in the match.

It was a fitting conclusion to what was a high-quality contest. Pearcedale led for much of the afternoon, thanks largely to the conversion of Hall, who booted his eight goals from just eight kicks.

A rightfully jubilant coach Leigh Stewart told the RPP Footy Show on Saturday morning that Hall was well worth the investment.

“To be fair, Barry was the difference between the sides,” Stewart said.

“What he and Daniel Kerr (former West Coast Eagles star who played for Pearcedale in round one) were able to do was the give the whole group something to really look forward to during a tough pre-season.

“The whole list had a spring in their step and the club was and still is buzzing,” Stewart said.

An estimated crowd of more than 2500 people turned up to Pearcedale to watch the match, while it is estimated that the club would turn over more than $40,000 for the day.

Hall captivated a packed luncheon for more than an hour prior to the match, then stayed around after the game to take photographs with players, supporters and most importantly, the kids.

The cost to have Barry Hall was more than $10,000, however, if you were at Pearcedale Football Club on Good Friday, you would have locked him in for next season immediately.

It would be unfair to say the day was all about Hall though.

Luke Dalmau, who skippered the Stingrays last season, was exceptional for the Dales, as was Harry Prior, who dominated two Frankston Bombers ruckman, including Ryan Kitchen.

Matt Cottrell was a clear winner on the day for the Dales too, as was Daniel Heijden and Laughlin Cowell. Glenn Anderson also added another three goals to his four last week.

Alex Harnett against his old side was clearly Frankston’s best, although he wasn’t listed in the team’s best.

If the loss against a side that didn’t make the five last year was bad enough for Frankston, in worst news coach Beau Muston left the field after injuring his knee. He will have scans this week to assess the full damage.

While the day belonged to the Sharks, the story was all about Dromana.

The Tigers have been hammered by two teams expected to go deep into the finals by 10 goals (Frankston in round one).

Sam Fowler was the only Dromana forward who looked dangerous and he won’t be sited for much of the season as he’s VFL listed. Beau Cosson didn’t take his place with foot soreness.

Billy Quigley too looked lively in attack but it is believed he is heading to the UK to play cricket.

Ruckman Rory Gregg was the best of the Tigers, while seasoned campaigners Rikki Johnston and Adam Hunter were also outstanding. Recruit Ryan Smyth restricted the dangerous Leigh Poholke to two goals in three quarters after he kicked three in the first quarter. Daniel Guerts left the field in the first quarter with what appeared to be a serious knee injury.

Sorrento’s relentless pressure and disciplined structures just wore down Dromana after an even start to the match.

It was the kids that really shone for the Sharks with Shannon Gladman getting best on ground, while Zac Byrns, James Brigden, Danny Stephenson and Chad Harris dominated. Troy Schwarze was at his best and Luke Tapscott and James Hallahan had a heap of it also.

Chris Dawes was missing with a hamstring injury but might be a chance against Rye this week, while Tom Langford played in the reserves because it would have pushed their points over the limit.

Sorrento coach Nick Jewell said having quality players in the reserves “was a nice problem to have”.

“We have players who wanted to come to the footy club and they are all aware of the situation,” Jewell said.

“The reality is though that you rarely have your best team on the park consistently, so we don’t see it being a real problem.

“Tom Langford missed yesterday but will spend most of his time at Richmond and when Chris (Dawes) is right then we’ll have to make that call.

“The club is in a really strong position and we’d rather have a points issue than an injury issue,” he said.

It was a bumper day for the Sorrento Football Club, who had 180 people at their luncheon at $90 per head and sold 100 slabs of beer before the end of the match.

Steven Robb was exceptional with three goals and Mark Devereaux was at his best.

Despite the win, it was again very unconvincing. They trailed Rye in round one by 37 points halfway through the second quarter and trailed Devon all day on Saturday.

Both Rye and Devon are expected to finish in the bottom three – there are some early concerns for the Blues.

Keegan Downie was clearly the best player on the ground with five goals and Greg Bentley was at his very best too. Bad news for Rye was the rib injury to star Adam Kirkwood.

On Good Friday, Andres Everitt booted four goals for Somerville and Tim McGenniss and Adrian Speedy dominated in the their 19.17 (131) to 10.6 (66) win against Tyabb.

The first quarter was even before the Eagles booted 16 goals to seven after the change.

Jordan Pollard was again the best for the Yabbies.