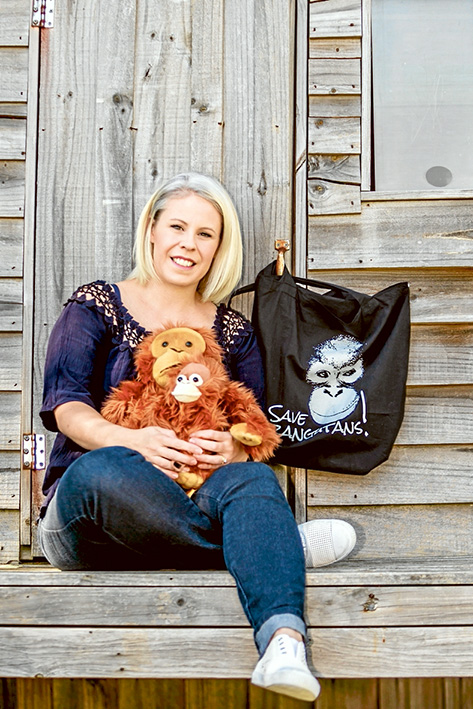 A LIFE-CHANGING visit to Borneo to help rear endangered orangutans came about after a Somerville woman was asked to “do something for yourself”.

Medical scientist Leonie Butler, of Somerville, said she had experienced the full “wife-mum-career thing” when her own mother suggested she take some time off and do something she really wanted to do.

That led Ms Butler to spend most of March enriching the lives of captive orangutans and sun bears at the world renowned Samboja Lestari rescue centre in East Kalimantan.

The Borneo Orangutan Survival Foundation is a 2000 hectare restored rainforest orangutan sanctuary created to provide a safe haven for rehabilitated orangutans and provide a source of income for locals.

“I’d always loved orangutans but helping them was something I’d always put on the backburner,” she said.

“When I googled Great Projects they sort of jumped out at me and I spoke to [husband] Mark who said ‘You’ve got the time and the money so go for it’.

“That was Cup Day last year and I booked the trip next day.”

Days in the rainforest were “hard but rewarding”. Ms Butler spent time making a type of porridge out of chopped bamboo and ginger leaves, and collecting reeds and peanuts which they smeared into the bamboo for the apes to eat.

“We saw lots of orangutans in cages, which was quite confronting,” she said. “The cages are mainly for the young ones whose parents have been killed and who are being rehabilitated so they can be returned to the wild.”

The orangutans’ naturally close-knit family groups take many years to rear their young and a mother won’t breed again until she has seen her offspring grow to independence.

Tragically, widespread land clearing for crops, such as palm oil, have meant orangutans are often forced into urban areas, where the adults can be killed and their young reared as pets. This separation from family means they do not receive the skills to grow up as capable forest dwellers and cannot survive in their once-natural environment.

Non-profit centres, such as Samboja Lestari, teach the apes to grow up naturally as orangutans prior to their release onto a series of seven safe island sanctuaries.

Ms Butler said the indigenous keepers developed a strong rapport and amazing interaction after working with their charges full-time over the years. “They teach them to be wild orangutans and to find food, build nests, climb trees and be at one with the forests,” she said.

Apes live and socialise in their cages and, eventually, go back to their “home” as a group, which eases the transformation.

One orangutan, Romeo, has been caged at the centre for 28 years, after being rescued as a stolen orphan. He is expected to be released back into the natural environment soon. “He’s the most chilled, laid-back fellow you can imagine,” Ms Butler said.

About 700 orangutans are in sanctuaries being rehabilitated for future release – 200 at Samboja Lestari.

Sadly, about 80 per cent of their forest home has been cleared for plantation farming since Indonesia began industrialising – at the rate of six football fields a minute.

“I have always been an animal lover but this is the first time I have ever done something like this,” Ms Butler said.

“I would like to do more to help as the condition in which they arrive at the centre is often appalling.

“I want more people to be aware, such as by stopping buying palm oil, which seems to be in everything we eat.

“Plantation oil, rather than that grown by clearing forests, would be better. We need to get people thinking.”

Those wanting to get involved can visit The Great Orangutan Project on the net. Other sites list palm oil products to avoid.