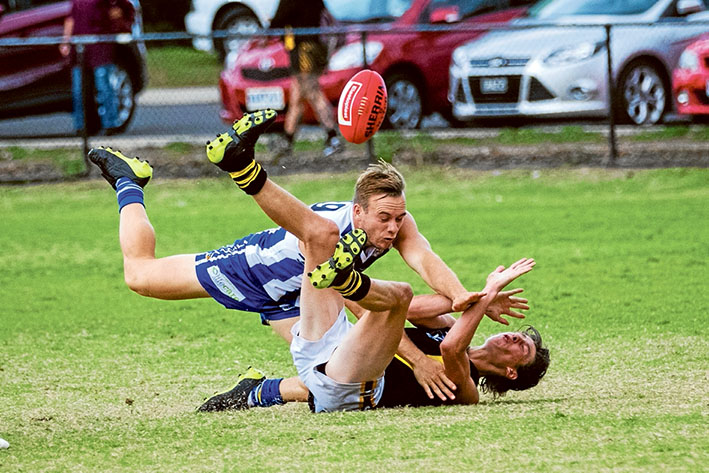 The six-time best and fairest winner, premiership player and league medallist became only the 18th player in MPNFL history to be awarded life membership for 300 games.

Burke has captained and coached Karingal FC and his loyalty has never wavered.

The godfather of Karingal FC, Daniel ‘Digger’ Watts, aptly described Burke as the most loyal, honest, humble and inspiring player and person in the history of the Karingal Football Club.

The Bulls honoured Burke at a tribute dinner last Thursday night and a panel luncheon on Sunday.

Pines has set-up a top of the table showdown against Frankston YCW this weekend at Jubilee Park after knocking over Edithvale-Aspendale on Saturday.

The Pythons head into the fourth round facing the games’ biggest challenge – the Stonecats on their home turf.

Following its form in the opening three matches of the season, the Pythons looked to be in good shape heading into the clash.

The Stonecats, albeit the most professional outfit in the comp, will come off a six-day break after playing Karingal on Sunday.

Pines spoilt the party of one of the MPNFL’s finest ever players, Edithvale’s Tim Mannix, who celebrated his 200th game.

Mannix is a premiership player, six-time best and fairest winner and league medallist.

However, even Timmy Mannix couldn’t make a difference to Pines dominance on Saturday at Regents Park.

Guy Hendry was also superb in the ruck and floating forward with two goals while lesser likes in Dylan Smillie and Ben Thomas were outstanding.

Will Flavelle booted four for the Eagles, as did one of the Eagles’ best Charlie Martello, while Angus Macquire and Callan Van Dyke were also outstanding players for the home side.

Trent Dennis-Lane was sensational once again for the Sharks with five goals, making it nine in two weeks, while Shane McDonald and Dylan Jones were at their best.

Darcy James and Todd Cracknell aren’t names synonymous with the Sharks but their performances on Saturday are an indication of the good form of the team right now.

The Sharks opened up a 33-point lead in the opening quarter and it blew out to 72 points at three-quarter time.

Jack Francis was a stand-out for the Gulls with six goals while Rhys Hensel and Simon MItchelhill worked tirelessly.

Seaford maintained its third position on the ladder with a percentage-booster against Langwarrin at Lloyd Park.

Dan Lewis was superb for the Tigers with four goals while Dean Williamson, Kane Taylor and Brayden Irving were unstoppable.

Rourke Fischer has had a tough time with injury over the past couple of years but he was back to his best last week, while a fit Aaron Turner was also impressive.

The traditional Anzac Day clash between Mt Eliza and Mornington will be played at Wooralla Drive on Tuesday.