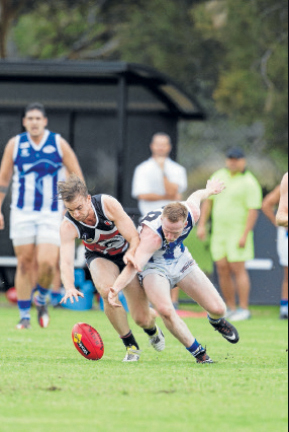 MPNFL stars Tim Bongetti and Aaron Edwards will be racing against the clock to be right for the Sharks country championships match against Geelong FL at the MCG on May 13.

Bongetti limped into the top of the table clash against Frankston YCW on Saturday and left the field midway through the third term. His left thigh was heavily strapped after he copped another hit on it early in the first quarter.

Aaron Edwards camped himself at full forward and hardly moved from there, despite willing himself to the contest on a few occasions. Suffering a back injury, one wondered why Edwards would have even bothered playing in the round four clash. Arguably the best player the competition has seen in the past 10 years, Edwards must now be in doubt to represent the Sharks in a fortnight.

Considering the domination of Christian Ongarello (Edwards’opponent) and BJ Credlin (Bongetti’s opponent), you could argue that they would have made a big difference.

In an ugly, uninspiring and uneventful game, there was only 10 points separating the sides at the final change.

Despite that, Frankston YCW always appeared to have another gear or two, which they displayed in the final quarter, booting four goals to one.

While Tony Lester celebrated his 250th game, Kyle Hutchison his 150th and Kevin Lylak his 100th, the win was more about the next generation of players for the Stonecats.

Luke Paynter is a bonifide star and looks very much at home in the seniors – he’s the next BJ Credlin.

Matt LaFontaine was the best player on the ground. The Collingwood VFL-listed player controlled the game and despite the Pines’ heat early, not once did he not put his head over the footy. In fact, not one YCW player backed away. The likes of Joey Lane, Paul Theobald, Mark Berenger, Rohan Forrest and co would have been proud.

Maklin Raine is getting better with every match, Angus Wright looks comfortable at the level and Lachlan Street was superb. You can throw Tom Capp and Jake Lovett in the mix too.

The Stonecats have class everywhere.

The Stonecats just keep breeding the next generation.

Lachy Marshall and Nick Boswell have been great additions, and they both played well, however, the depth of Pines’ class is way off where It needs to be to challenge the best.

Paul Scanlon was easily the Pines’ best player and was one of the best three on the ground.

Mt Eliza and Mornington played last Tuesday (ANZAC Day) in a tough contest and were burned by the four day turn around in their respective matches on Saturday.

Now maybe Edithvale may have still beaten the Dogs and Chelsea may have caused an upset against Mt Eliza, however, we all know that the four-day break played a significant role.

AFLSE made a huge mistake with the fixturing and both the Dogs and Redlegs would be fuming behind closed doors.

Take nothing away from the Eagles and Gulls though.

Will Flavelle and Charlie Martello booted four each and Chris Wylie starred.

Paul McGettigan and Dale Whelan booted five each for the Dogs.

The Redlegs had a number of changes from Tuesday’s team but Shaun Knott played his first game and impressed with three goals.

Matt McCormack was sensational for the Tigers with seven goals while Dean Williamson and Aaron Walton were superb.

Michael Burke in game 301 and Damien Ashcroft in game four were the best of the Bulls.