Sharks drown at the MCG 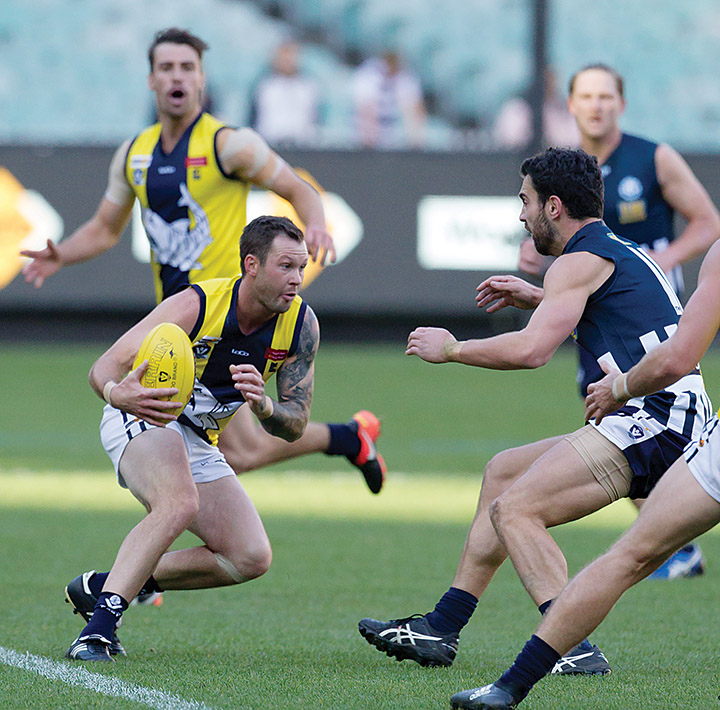 THE Mornington Peninsula Nepean Football League failed in its attempt to become the greatest league in Victoria and arguably Australia at the MCG on Saturday.

The MPNFL trailed by as much as 35 points during the third quarter and never looked to threaten the title holders.

While many looking at the score line could be forgiven for thinking that the MPNFL kicked themselves out of it, other than a couple of missed opportunities in the second quarter, most of the behinds were kicked from either long range or rushed.

The reality is that the MPNFL was just beaten by a slicker, more highly skilled football league.

The final margin of 22 points was just one point greater than the quarter time margin of 21 points.

Geelong kicked the opening three goals of the game, kicking towards the Jolimont St end before Sorrento’s Nick Corp took advantage of a one on one in the goal square.

The MPNFL’s only control of the match came in the first six minutes of the second quarter, booting the opening two goals, missing a couple of sitters and reducing the margin to seven points (31 to 24).

However, once again, Geelong was able to withstand the attack, steady, and respond with four goals in 14 minutes to blow the margin back out to 27 points.

That was the story of the day. Geelong had all the answers. Whenever the MPNFL looked as though it was going to make some kind of challenge, Geelong would take control of the situation and compose itself, play tempo footy, pass the ball around and regain the ascendancy.

The MPNFL played the first 15 minutes of the third quarter one player short after Pines’ Tim Bongetti was yellow carded for being involved in a scuffle after the half time siren.

Bonbeach’s Shane McDonald kicked a sensational goal after beating two opponents at the beginning of the third quarter to drag the margin back to 15 points before Geelong once again booted the next three.

The margin was 27 points at three quarter time and Geelong kicked the first major of the final quarter to ice the contest.

YCW teenager and the youngest player on the field, Matthew LaFontaine, along with Corp, booted the last two goals of the game to reduce the final margin from 34 points to 22.

The MPNFL’s strategy going into the match was to hurt the Geelong bodies on the inside and win the contested footy.

Geelong’s strategy was to play as many fleet-footed kids as possible and utilise the wide open spaces of the MCG to cut through the opposition.

Without question, the Geelong FL strategy came up trumps.

The MPNFL went in with a team with an average age of 27, the large majority of whom played in the win against Northern FL last year.

Geelong went in with a bunch averaging 22 years, 14 of whom had never played interleague footy with Geelong before.

The Geelong defence was dynamite and it was evident early that the MPNFL lacked leg speed in attack. La Fontaine went down there but it robbed the Sharks of speed through the middle.

Bonbeach’s Dylan Jones won the battle of the rucks but Geelong was better in tight. It had a couple of bulls at the contest and once they dished it out, the MPNFL couldn’t keep up.

In defence, the MPNFL had its work cut out, however, considering the organisation of the opposition bringing the footy in, they held up quite well.

Mornington’s Warwick Miller and YCW’s Christian Ongarello were pretty good in the back half and Sorrento’s James Hallahan was clearly the MPNFL’s best player. Hallahan played well on the ball until they required his drive from half back, which he provided.

Skipper Rikki Johnston was very good until he rolled his ankle in the second quarter. He came back on but wasn’t the same.

Sorrento team mate Luke Tapscott was the most productive midfielder and worked hard both ways.

The real problem for the MPNFL was through the middle and the forward half. It was just two slow in both areas and were easily turned inside out by smaller, fleet-footed opponents.

There would be a big handful of MPNFL players that would never want to see any vision of the game and put the memory of the game behind them.

One thing they should never lose sight of however is the experience of playing on the MCG – what a privilege.

Hats off too to MPNFL coach John Hynes, as well as assistants Gavin Artico, Paul Hopgood, Pat Poore and John Georgiou, who have been meeting, planning, training and watching games of footy since November last year.

The preparation could not have been any better.  The support staff of the MPNFL were also fantastic.

However, despite the knowledge of the opposition, they could not underestimate the sheer talent and composure of the far less experienced Geelong FL.

Next season, perhaps, it’s about taking some lessons from the Geelong FL and showcasing our best young talent, mixing it with some experienced heads. It should be about showcasing our future.