The upsets continue in Nepean Division 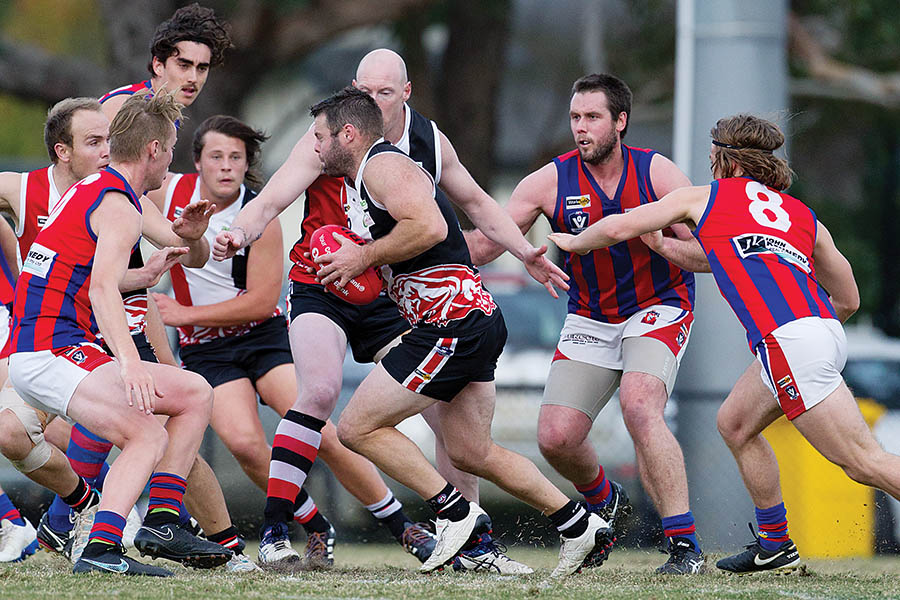 THE evenness and unpredictability of the 2017 Nepean Division season continued on Saturday.

Rosebud caused the upset of the round when it headed to the home of reigning premier Hastings and touched them up to the tune of 41 points.

The Buds enjoy the open spaces of Thomas Barclay Oval and the ground holds no fear for them, given their great record there over the past few years. It proved to be the case from the opening bounce on Saturday.

Rosebud really set up its win in the second quarter when it was able to defend well against the breeze and go into the long break with a 16 point lead.

Perhaps Hastings started to drink their own bath water on the back of some impressive victories.

A total of 27 scoring shots to just 16 highlighted Rosebud’s domination.

Anyone thinking Rosebud isn’t quite at the level were reminded on Saturday that it’s still well and truly in the mix.

Keegan Downie was sensational with four goals, Ben Dwyer was at his best in the ruck and dominated Josh Mulheron and Greg Bentley was his usual ‘Rolls Royce’ self.

Stevey Robb with three goals was the best of the Blues.

Rye’s Ben Winters-Kerr went out of football in the best possible way on Saturday, booting four goals as his team knocked over Devon Meadows in another upset.

The Meadows, who again forfeited Under 19s, have shown pretty good form in the past month and were expected to win.

With a new look, young side, I would think beating Devon at Devon would have been one of the most satisfying wins the club has experienced in recent memory.

Pearcedale booted the opening three goals of the game with the wind against Red Hill on Saturday. It took until the 15-minute mark of the final quarter for the Panthers to kick their fourth.

Make no mistake, this was a new low for Pearcedale coach Leigh Stewart, who was confident his side could get the job done against the Hillmen.

The fact is the clubs are poles apart. To make matters worse, former Pearcedale players Dylan Hoare and Chris Irving dominated for the Hillmen, booting two goals each and controlling the game throughout.

Sam Fowler was back from Northern Bullants and booted four while Ethan Johnstone and Sam Guerts dominated.

The Eagles trailed by 11 points at half time despite having four more scoring shots and in the final quarter, they booted five goals to three.

The problem was, it allowed Sorrento to boot 7.8 to 1.2 in the third quarter and blow them away.

Sorrento skipper James Hallahan was the best player on the ground, providing enormous drive from half back, Nick Corp marked everything that came near him in attack and Chris Dawes kicked a sensational right foot snap goal against the boundary line after sharking it from the ruck.

The Eagles’ aren’t that far away but height is a major issue for them, as is a lack of concentration for periods of time.

In better news for the Eagles, there were rumours around the ground that key forward Luke Rowe may return, while Justin Farrelly may come back sooner than expected.