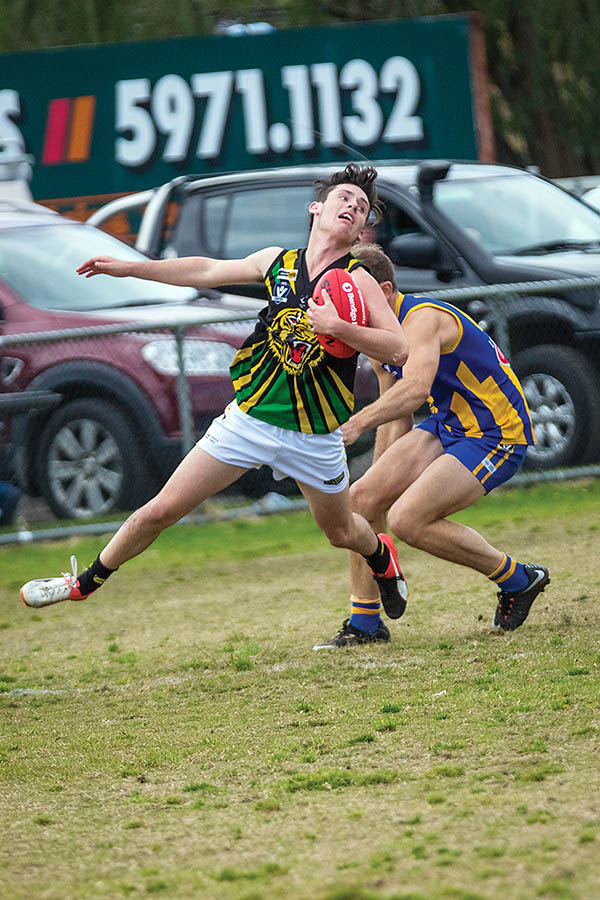 SORRENTO flexed its muscles again on Saturday and in doing so highlighted once again that Red Hill is not capable of winning the 2017 Nepean Division premiership.

In another really important game for the Hillmen, they simply weren’t able to match the power of the Sharks and struggled to get the ball forward of centre to kick goals.

The Hillmen have now lost to Frankston, Hastings and now Sorrento, all at home.

The Red Hill defence held up OK but when the opposition has a forward line consisting of Leigh Poholke, Chris Dawes and Nick Corp, it’s hard to contain.

Red Hill coach Tony Blackford said after the game that “it’s achievable to hold a couple but it’s near impossible to hold them all”.

Blackford was right. Poholke was held to one goal and Corp didn’t bother the scorers, however, Chris Dawes booted five.

Luke Tapscott was the best player on the park and completely dominated through the middle in the absence of Red Hill’s Ben Poole and Chris Irving.

Poole and Irving are Red Hill’s best inside midfielders and them not being there on Saturday hurt them.

Poole has finally succumbed to a bad knee and has decided that he can’t push his body through it any more. He retired before the game. Irving will be back next week.

Sorrento had some good news of their own through the week with the signature of Cayden Beetham, who will return as a one-point player. Andrew Lovett was also at the ground on Saturday watching and has been sighted at training.

Somerville once again had the better of the opposition in the first half but could only manage 4.11 to 7.5 in the first hour. Last week they had three more scoring shots that Sorrento at halftime but trailed.

Sam Fowler makes a significant difference to the Tigers and his three goals were significant.

Timmy McGennis played his best game of the season for the Eagles while Jake Neuchew played his first game and shone.

Rye made it back-to-back wins too against Crib Point but were made to work for it.

The Magpies led at the long break but Rye booted seven goals to three after the break to win 11.12 (78) to 8.8 (56). Rye has five U19s in the side currently and all of them are getting better every week.

Jai Lloyd was also a very handy addition, back from Sandringham for the remainder of the season.

Hastings got back on the winner’s list against an undermanned Pearcedale. According to coach Leigh Stewart, the Dales are minus 13 of their best players at the minute through injury.

Rosebud kicked atrociously again on Saturday but still managed a 15.28 (118) to 4.4 (28) win against Tyabb. Keegan Downie nailed four and Matt Baker three for the Buds.

The Bombers trailed all afternoon, including by 18 points at three-quarter time.