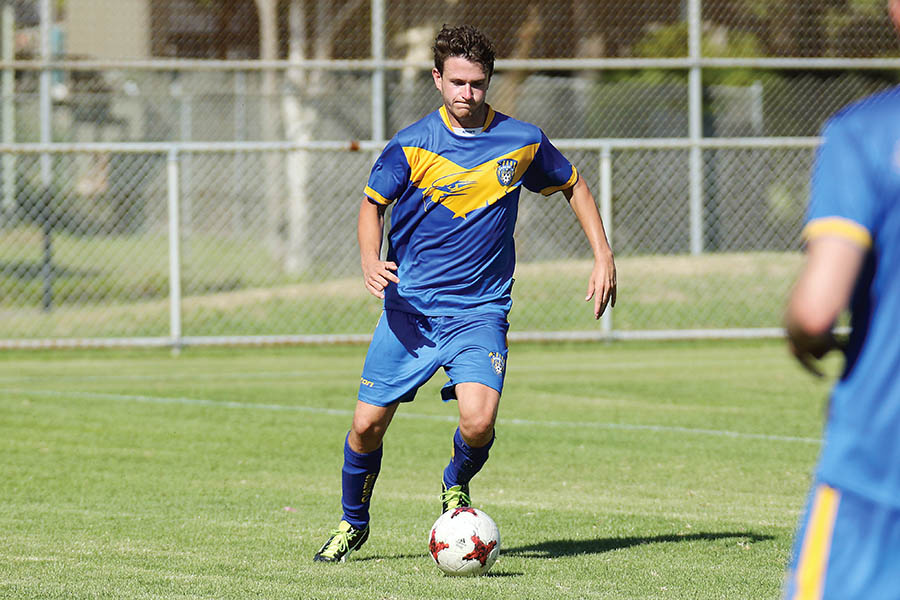 While the Barkers were surprising the football world with a 3-2 win against the league leader in State 1 South-East, Somerville Eagles were soaring to a 3-0 win over Old Mentonians in their State 5 South encounter at Mentone Grammar.

A Ciaran McConville corner in the 31st minute gave the Eagles the lead and a McConville cross in the 56th minute found Liam Morgan sliding in to volley home from close range.

Pat Acha cut in from the left and completed the rout in the 73rd minute.

Bailey Henderson came off the Eagles’ bench and won a penalty following a superb through ball by Alex Colville but when Henderson blew the conversion he was subbed.

“We have definitely turned the corner and we are really starting to gel as a group,” said delighted Eagles president Felix Arena.

It was a different scene at Lawton Park as four goals in the final eight minutes found Langy players trudging towards the dressing room with glum faces after unexpectedly losing their unbeaten record.

Aaran Currie and Kieron Kenny went closest for Langy in the first half but a superb turn by Mooroolbark’s Ross Clark in the 78th minute and a firm low shot inside the far post broke the deadlock.

Within a minute Mat Luak had tucked away the rebound following a blocked Nicholes shot and Langy had an unlikely lead.

A couple of minutes later and it was 2-2 after Mooroolbark striker Sam Klepac had been bodychecked and converted the resultant penalty with ease.

Three minutes into injury time a draw seemed certain until a George Whiteoak howler gifted possession to Klepac and he made no mistake from close range for a dramatic decider.

Its defensive woes continued when it went down 3-2 to Casey Comets on Saturday.

But it was another new signing, Comets’ capture Delfin Mosebe from Springvale White Eagles, who caught the eye.

The winger from Equatorial Guinea was making his first start for his new club and had a hand in two of Comets’ goals.

Mornington started on the front foot and star striker Ryan Paczkowski forced Comets keeper Faraz Zenoozi into a save low down at his near post after just three minutes.

One minute later Mornington was in front after Chris Reid sent Paczkowski clear and he pinpointed his left foot strike inside the far post.

Simon Mur should have extended Mornington’s lead when he broke through in the 26th minute but shot straight at Zenoozi and Comets levelled in the 27th minute after Mosebe crossed from the left and a defensive mix-up between Mornington keeper Kris McEvoy and left back Jack Truelove allowed Comets midfielder Ray Markley to nip in and poke the ball home from close range.

Mornington went back in front in the 60th minute via an Elliott Capel own goal after the Comets defender and Mur both attacked an inviting Paczkowski cross swung in from the right.

Another own goal, this time from Mornington’s Elliott in the 73rd minute, made it 2-2 after Markley’s shot was blocked and Elliott was trying to cut out a shot on the rebound from substitute Andy Stubley but only succeeded in deflecting the ball past McEvoy.

A slick move and fine finish by Matheson sealed Mornington’s fate in the 78th minute.

Mosebe and Jesse Martindale combined wide on the left before the latter cut the ball back to Matheson who shielded well then turned and smacked a firm low strike inside the far post.

Mur went close in the 80th minute and in the 90th minute Matheson chipped the stranded McEvoy but the ball struck the bar and was cleared.

Comets are playing a friendly against Doveton at Comets Stadium on Tuesday at 7.30pm and the match will feature a Chilean striker that the club has signed pending the processing of his international clearance.

“It was a strong performance and we were unfortunate not to take all three points having hit the post and having one cleared off the line,” said Lewis.

“Young Aiden McKenna is just 16 and he had an excellent game at left back.”

Strikers were without defensive linchpin Chris McKenna, who was working in Sydney, and Tom Hawkins who was suspended after accumulating five yellow cards.

And gun striker Aziz Bayeh was forced off with a hamstring injury after 22 minutes and was replaced by Trevor Johnston.

An own goal in the 59th minute gave Strikers the lead but Eltham substitute Peter Koskos equalised in the 81st minute.

Frankston Pines lost big Ioasa Saemo to a straight red card in the 22nd minute of its State 2 South-East home game against Mazenod on Saturday but the 10 men stood tall to record a stirring 1-0 victory.

The pivotal moment came in the 57th minute when Francois Armansin broke down the left then cut inside and squared the ball to Jack Wrobel whose lay-off was slotted home by Matt Davis.

“It was a huge team performance and to hold our shape, stay organised and persevere was outstanding. No wonder the boys were spent at the end of the match,” said Pines head coach Paul Williams.

A huge plus for Pines was the return of CJ Hodgson from Comets and don’t be surprised if there is more good news on the playing front this week.

Seaford United might be down but it’s not yet out judging by Saturday’s crucial 1-0 home win over fellow struggler Doncaster Rovers.

Harry McCartney reports that Seaford welcomed the return of former captain Marcus Brownlie to shore up the defence.

Brownlie and former Berwick City player James Ashby were among a number of changes made by senior coach Paulo Pinheiro in an attempt to drag his side off the bottom of the State 2 South-East ladder.

Ace Seaford striker Dylan Waugh settled the issue just before half-time when he ran onto a long punt downfield from Seaford keeper Harrison Burgess and tapped the bouncing ball over the head of Rovers custodian Daniel Ciric into the unguarded goal.

Burgess turned in a man-of-the-match performance making a series of top-quality saves.

Doncaster came close in the 76th minute but Chris Pascal-Therios watched in dismay as his shot was cleared off the line by Seaford defender Admir Music.

Skye United maintained its promotion push in State 3 South-East with a thumping 7-0 away win over struggling Sandringham on Saturday.

Stand in skipper Marcus Collier, deputising for suspended Mark O’Connor, kicked off proceedings in the first minute lashing home a loose ball in the box to put the visitors ahead.

From there it was all one-way traffic, as Daniel Attard tapped in a Michael Putson cut back in the 29th minute and Wumjock Jock got on the end of a Jason Nowakowski cross with the last kick of the half to make it 3-0.

Attard continued Skye’s dominance in the second half and his finish from a one-on-one triggered another barrage of goals.

A red card for a handball on the line to Sandringham’s Ben Harris in the 55th minute worsened matters for the host but Nowakowski put the resulting spot kick wide.

But Nowakowski made amends in the 68th minute when his cross found Attard whose diving header completed his hat trick.

Jock notched his own hat trick in the 75th and 81st minutes and the hiding was complete.

Baxter won bragging rights for 2017 when it defeated bitter rival Rosebud Heart 1-0 on Saturday in their State 4 South derby battle at Truemans Road.

Lipsett gathered the rebound then cut the ball back to Pagliarulo who drilled it home with his left foot from close range.

Baxter custodian Francis Beck won his personal battle with Heart hitman Dave Greening which had a major bearing on the outcome.