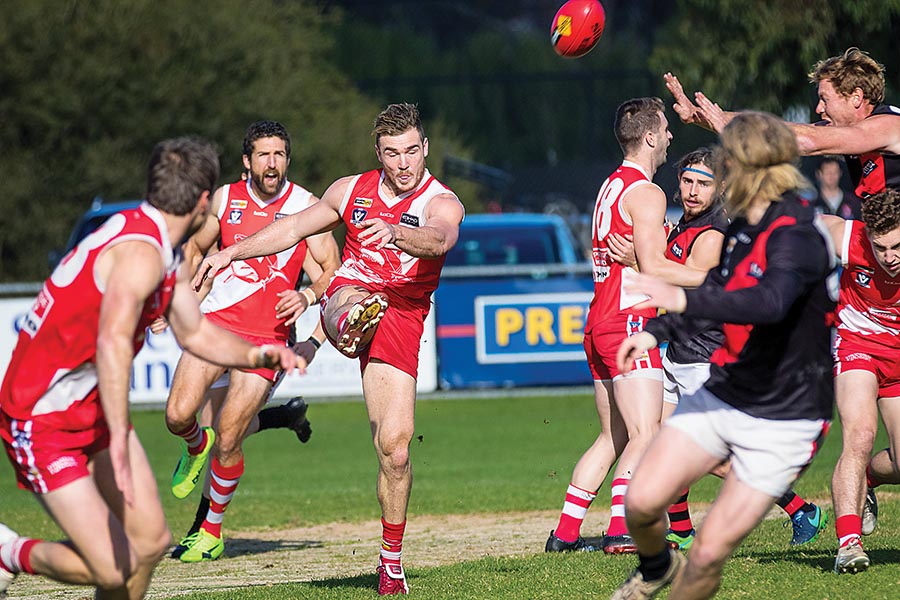 SORRENTO coach Nick Jewell has scoffed at suggestions that the competitive nature of the 2017 Nepean Division season was over after his side handed out an almost 100-point thrashing to Frankston Bombers on Saturday.

Frankston Bombers came into the game ranked second on the ladder, only behind Sorrento, however the home team made the opposition look as though they were miles off the pace as they proceeded to belt them.

The one-sided demolition prompted keyboard warriors around the peninsula to declare the season was finished.

One person listening to the match on RPP FM sent through an SMS message suggesting we “pack up the commentary gear and head home”.

“Why don’t we just declare Sorrento as 2017 premiers,” the SMSer sent through.

“With four ex-AFL players and one from the SANFL, plus a list of talent an arm long, it was always going to be a case of Sorrento buys another flag,” the SMS read.

The SMS went on to claim that commentators and journalists were bias towards Sorrento.

Unfortunately, some people have very short memories. The doomsayers might not remember but I certainly recall writing stories trying to help save the Sharks when they were getting belted by 40 goals every week 20 years ago.

As a result of some good, staunch club people, together with some passionate local business people and a committed group of young talent that went the journey, they have been able to turn the club around.

And Nick Jewell won’t have a bar of his side going on its merry way and just claiming the 2017 premiership.

“I understand the hype and people are always going to poke the stick at Sorrento, I get that,” Nick said.

“It was a wonderful day for our club yesterday. We had 180 at our luncheon, we had all our past players here for the game and we won in all three grades.

“None of this was handed to us on a platter though. People don’t understand what happened in the past to get us to this point and what goes into doing what we do each week. There’s a lot of wonderful people that put in great amounts of work to ensure that we remain competitive.

“People have also got to remember that we didn’t even make the finals last season.

“On Saturday, we came up against a team that played in a grand final last season and was touted as the premiership favourites. We had an opportunity to prove ourselves.

“They kicked the first three goals of the game inside the first six minutes of the match. We kicked the next 10.

“We went on to win the match with eight local kids under the age of 20 and 17 one point players. People remember the names Dawes and Tapscott but they don’t think of Harris, Byrns, Gladman, Tomkins, Holt, etc.

“The season is a long one. We won a Round 10 game by 90-odd points. It was a good day. We only need a couple of injuries to some prime movers and things change dramatically.

“There’s a long way to go and I wouldn’t be handing anyone a premiership cup in round 10,” Jewell said.

Three players were sent from the field by umpires in the space of two minutes in the second quarter. Nathan Lonie was red carded for striking Leigh Treeby and his case was sent to the tribunal. Ruckman Ryan Kitchen took two weeks for headbutting Chris Dawes and Corey Micari was yellow carded also for striking.

James Hallahan was sensational out of the middle with five goals for the Sharks while Zac Longham was at his best for Frankston with four goals.

Red Hill bounced back and had a strong second half against a gutsy Devon Meadows, winning 12.9 (81) to 5.9 (39). It was typical Red Hill, strong in defence until opening up in the last. Jono Ross booted four and Marcus Dal Lago was superb for the Hillmen.

In other matches, Dromana made it five wins in a row with a 45 point victory over Rye, Rosebud bounced back to beat Pearcedale by 79 points and Somerville played four strong quarters of footy to beat Crib Point by 53 points.