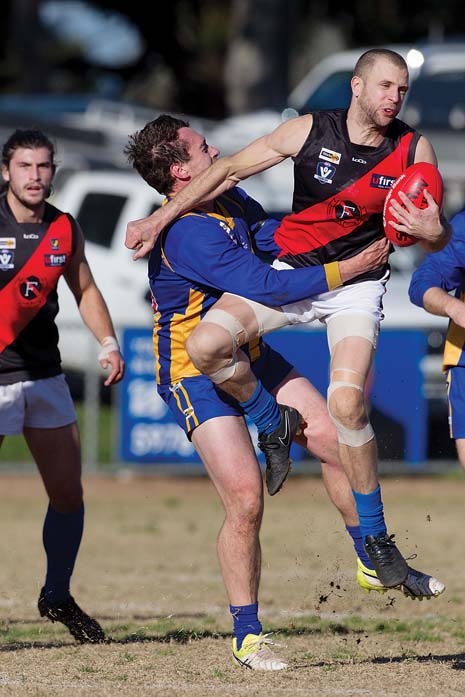 PINES booted seven unanswered goals in 20 minutes of devastation to turn a seven-point deficit into a 35-point victory against Bonbeach on Saturday.

In a high-quality game between the top two teams in the competition, Pines was able to find something extra when it mattered most to continue its domination over the Sharks.

In his three years at the helm for Bonbeach, coach Steve Hughes has never tasted victory against the Pythons.

At the six-minute mark of the last quarter, after a see-sawing battle all afternoon, the Sharks booted a goal and went seven points up after leading at quarter time.

At that stage of the match, the first goal of the last quarter was an important one.

However, as was often the case throughout the match, the opposition was able to hit back. In this instance, Pines was devastating, booting the next seven goals of the game, winning 16.5 (101) to 10.6 (66).

There is a real resolve and maturity in this crop of Pines players. Like it did against Seaford a few weeks earlier, the Pythons were able to find something extra when the chips were down.

Pines’ stars stood up again. Guy Hendry was the best player on the ground, controlling the defensive zone and taking more than 20 marks, both contested and uncontested. His ball use was also a feature of the game.

Whether he was setting things up from half back or winning his own footy through the middle, Luke Potts was masterful, while Aaron Edwards and Tim Bongetti were first class with five goals each. ‘Bongo’ is a rare breed in this game. Coaches talk about second and third efforts, Bongetti finds a fourth, and is as classy at ground level as he is in the air.

Corey Ash was dropped a couple of times in contests by reigning league medallist Shane McDonald, but it didn’t deter the Pines stopper from completing the task, winning the battle. Ash is a genuine tagger in the modern game and wins his own footy.

Dylan Smilie is fast becoming one of the best ruckmen in the game and he clearly outpointed Bonbeach’s Dylan Jones.

In fact, young Tom Hogan was better in the ruck than Jones.

With Hendry dominating in defence, it was puzzling as a spectator not to see the Shark’s throw Jones into attack to make Hendry more accountable. Jones had zero impact on the game.

The Pythons have also found another one in Lee Hearnden, who provided sensational support in the ruck for Smilie. Not only was he good in the ruck, but Hearnden also covered the ground well and was like a 193cm midfielder.

There’s a lot to like about the 2017 Pythons. Bonbeach just needs to find a way to beat them.

Mt Eliza has set-up a match of the day showdown with Frankston YCW this weekend after controlling its match against Edithvale-Aspendale at Regents Park.

The Mounties will play Frankston YCW in the RPP Match of the Day on 98.7FM.

The Tigers will be happy to escape with the four points in that one.

Only six points separated the teams at half-time when Karingal hit back with eight second-quarter goals, however, Chelsea booted four unanswered goals in the third to set up the win.