Push for dredging not seawall at Portsea 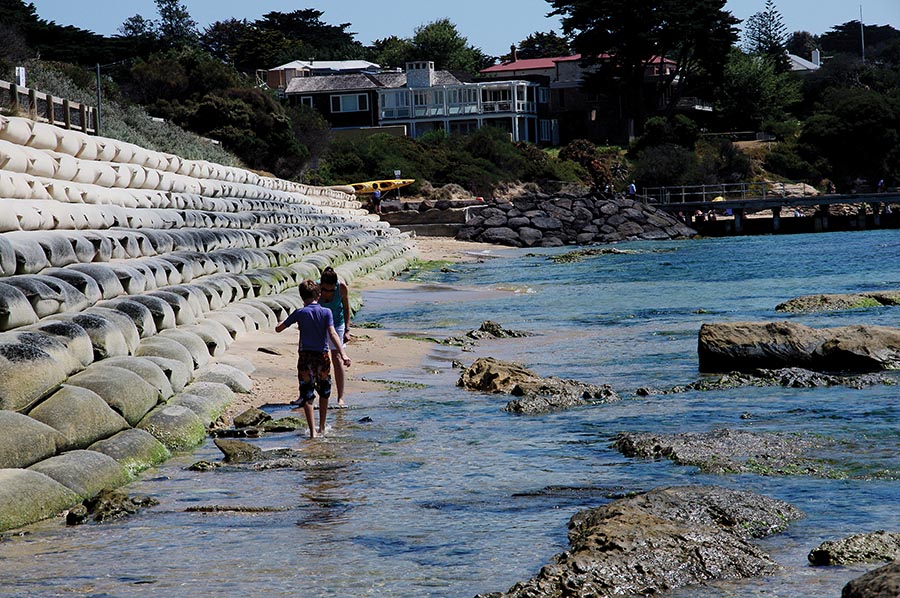 Rocks for bags: The $3 million plus temporary sandbag seawall erected in 2010 to stop further erosion of the foreshore at Portsea will be replaced by a permanent rock wall at a cost of $3 million. Picture: Keith Platt
Share
Facebook Twitter LinkedIn Pinterest Email

BUILDING a seawall at Portsea means the iconic beach will never return, says the man who successfully lobbied the state government to investigate massive erosion that started in 2009 and led to the loss of 400 metres of prime beach.

Colin Watson, president of Nepean Ratepayers Association, said he was disappointed with the decision to replace the temporary sandbag wall with a rock seawall.

“Our association has been negotiating with the Department of Environment, Land, Water and Planning for several years. I believed its intent was to fix this problem, but the seawall will not do the job,” he told The News.

“Something must be done to divert the waves hitting the beach.

“I am very unhappy with the decision after encouraging the department over the past four and a half years to fund studies to initially establish the core problem of why the wave energy is occurring and then after that fund a study to find out how it can be fixed.

“The decision was purely financial. You would have thought after doing the channel deepening, which ultimately added to the value of the Port of Melbourne, which the government leased for $9.7 billion, that spending $20 million or 2 per cent of the sale price wasn’t unreasonable.”

He said the association would examine “what we can do to have the government reverse its decision”.

DELWP last month announced it would begin designing a rock wall to provide “long-term protection” to the foreshore and beach.

The decision to replace the sandbag wall with a rock one follows the completion of an assessment by consulting firm Advisian, a division of Worley Parsons.

Earlier this year Advisian suggested five options for the beach but said only two would be effective over the long term – so-called “configuration dredging” at a cost of more than $20 million or building a breakwater at a cost of up to $29 million.

DELWP has opted for a rock wall plus bringing in new sand at a total cost of $3 million.

Configuration dredging would alter the shape of South Channel off Portsea, which scientists have blamed for the increase in wave size and frequency that destroyed the beach. The channel was altered during the government and Port of Melbourne Corporation’s Channel Deepening Project in 2008 and 2009.

Reports of abnormally large waves hitting the front beach were first made in late 2008. The dredger Queen of the Netherlands started digging in The Heads in April 2008.

The government and port corporation have consistently denied that dredging caused the erosion but two state government-commissioned reports – by Water Technologies and the CSIRO – revealed the removal of sand further out in Port Phillip had changed the shape and power of waves hitting Portsea beach.

The CSIRO report stated a change in the local wave conditions was the likely cause of the erosion at Portsea but this could not be measured accurately due to a lack of “long wave records at Portsea beach that predate the erosion event and CDP [channel deepening project]”.

The authorities said the beach was destroyed by natural causes such as storms, higher sea levels and natural erosion.

Mr Watson said there had been at least six reports and/or peer reviews of reports, all but one since dredging was completed in 2009. Nepean Ratepayers Association had responded to reports when asked by the government.

“Following the Advisian report, we asked for the configuration dredging as we received advice from coastal experts that this was the best way to stop swell waves pounding the beach,” he said.

Advisian stated the dredging option would take three years to complete including nine months of construction.