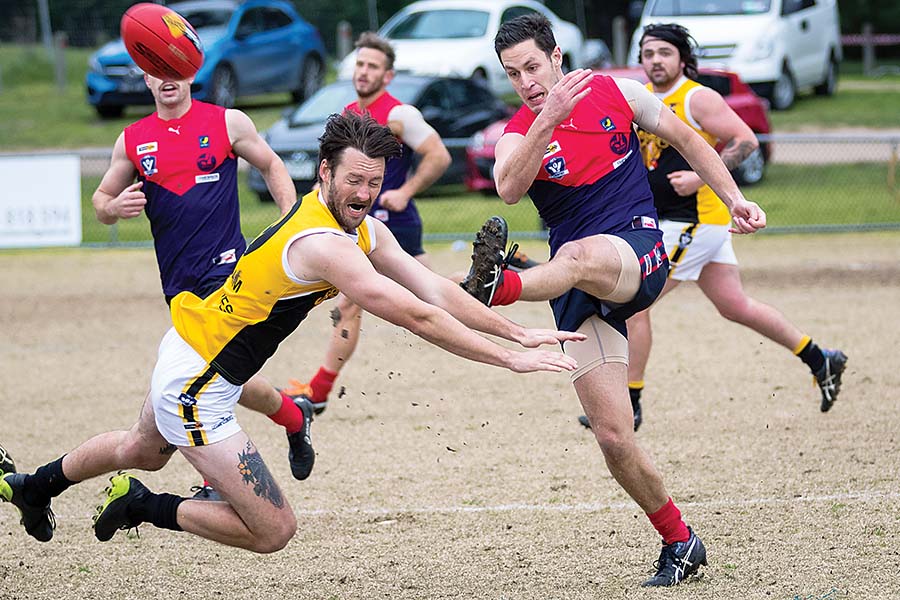 To achieve the ultimate in 2017 in MPNFL Peninsula Division, a team must be able to beat Frankston YCW – that’s something Mt Eliza can’t do.

Not this season anyway.

Frankston YCW had 15 of its best players out of the team due to either representative football, VFL or injury.

The Stonecats were ripe for the picking and the Redlegs couldn’t get the job done.

Justin Van Unen booted six goals in the opening half for Mt Eliza and looked unstoppable, however, when YCW tightened the defensive pressure up through the midfield and ‘JV’ was forced to go one on one with BJ Credlin in the air, the Redlegs lost all avenue to goal.

Mt Eliza just does not have a Plan B if Van Unen doesn’t kick goals. There’s no one else who looks likely to kick one. The Redlegs booted just 1.2 in the second half, all of that coming in the final quarter.

In the ruck, Ash Eames and Macklin Raine beat Grant Goodall. Goodall won the tap-outs but not many were to advantage and he had little impact around the ground.

For YCW, there’s so much to like about their program. Even with three debutants in the team and another half a dozen who have played less than a dozen senior games, they looked right at home playing the brand and structures that coach Wayne Capp is looking for.

Pines may be without key forward Aaron Edwards for the remainder of the season after he suffered what appeared to be a serious knee injury in his team’s 13.15 (93) to 5.6 (36) victory against Langwarrin.

Edwards left the field in the opening quarter after young Langwarrin defender Nick Tuddenham ran across his knee in a bid to prevent him from taking a mark.

Edwards was seeing the North Melbourne FC doctor on Sunday to get a full understanding of the injury.

Coach Pat Swayne said best case scenario was that the injury was a medial ligament, which would put him out for between four to six weeks.

It was a scrappy affair at Lloyd Park, which had zero atmosphere.

Langwarrin started the game with two extra defenders and had defensive forwards (taggers) on Luke Potts and Nick Boswell across half back.

It’s a poor ploy by the Kangas coaching team. I wonder how forwards Kieran Albanese and Gerard Brown feel about the tactic, given they hardly see the footy.

The Kangas are a young team who should be encouraged to go out and play the game. Kicking five goals each week is boring dwindling crowds and disenchanting the playing group.

Dale Tedge booted five goals for the Pythons after being shifted when Edwards left the field.

Edithvale-Aspendale are still in the finals hunt after dishing out a convincing five goal win against Bonbeach, 12.11 (83) to 7.7 (49).

The Eagles were three goals up at quarter time and never looked back with Mick Meehan booting four goals and Brendan Neville and Chris Wylie dominating.

Brad Doyle and Tommy Shaw were the best of the Tigers, who have been ordinary in the past month.

The news is worse for the Bulls also with legend player Luke Van Raay doing an ACL last week after 292 games.