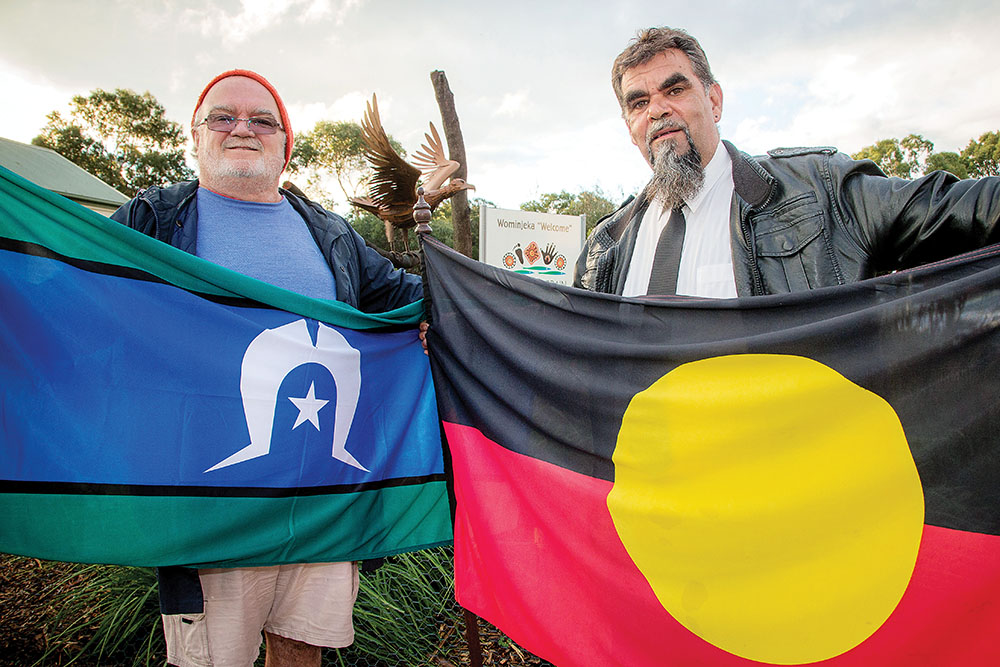 THREE flags were raised at the “hut by the sea” at Hastings to mark the start of NAIDOC Week.

“Hut by the sea” is the English translation of the Boon Wurrung phrase Willum Warrain, the name of the Aboriginal community’s gathering place in Pound Rd, Hastings, that opened in 2014.

This year’s theme was “Our Languages Matter” to highlight the importance of Aboriginal and Torres Strait Islander languages.

About 250 distinct language groups existed by the late 18th century but less than half are still spoken.

Willum Warrain Aboriginal Association president Peter Aldenhoven illustrated his talk about the loss of languages with a copy of Yan-nhangu Atlas and Illustrated Dictionary of the Crocodile Islands, created by the late Laurie Baymarrwangga and anthropologist Dr Bentley James.

Laurie Baymarrwangga was the last fluent speaker of the Yan-nhangu language (and the 2012 Senior Australian of the Year), which was spoken in northwest Arnhem Land in the Northern Territory.

“Aboriginal and Torres Strait languages are not just a means of communication, they express knowledge about everything:  law, geography, history, family and human relationships, philosophy, religion, anatomy, childcare, health, caring for country, astronomy, biology and food,” said national NAIDOC committee co-chair Anne Martin in a news release for the week.

Some of the stories of the Mornington Peninsula’s original people and their language are told in Carolyn Briggs’s The Journey Cycles of the Boonwurrung, first published in 2008 and revised in 2014.

(According to peninsula-based author Marie Fels, author of ‘I Succeeded Once’ – The Aboriginal Protectorate on the Mornington Peninsula, 1839-1840, there are 68 spellings of the word Boon wurrung with the most common being Boon Wurrung, Boonwurrung, Bunerong and Bunurong. Most writers use Bunurong/ Boon wurrung. This book is also a source of information about the peninsula’s Indigenous people.)