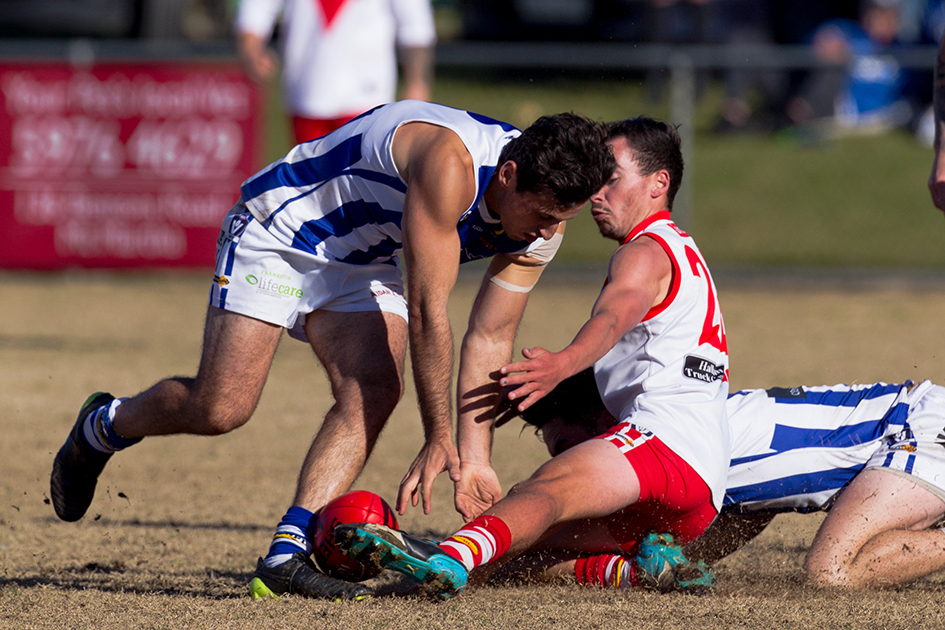 SEAFORD coach Ben Murphy will look to continue to “change things up” at training following another disappointing loss on Saturday in MPNFL Peninsula Division.

The Tigers have dropped off the face of the earth in the past six weeks after getting away to a terrific start this season.

On Saturday at home it suffered perhaps its worse loss of the season, an eight goal thrashing at the hands of lowly-placed Mornington.

Seaford went through a heavy training load for a period but that ceased three weeks ago, leaving Murphy to say that it had nothing to do with his team’s recent form.

“Our confidence is down and I just can’t put my finger on it. Like Paul Roos said, you can’t buy confidence from a shop.

“Some of our more senior players are making some uncharacteristic mistakes, such as dropping uncontested marks.

When your confidence is down, these things happen and collectively we need to get ourselves out of it.

“We’ve got a few injuries sure but it doesn’t justify simple mistakes and our overall form.

“Our game plan and structures haven’t changed drastically – maybe that’s what we need to do?

“This competition is unforgiving and every team goes in every week thinking they are a chance to win. Mornington would have looked at our performance last week and on the back of a big win themselves, would have come here on Saturday giving themselves every chance.

“Take nothing away from Mornington. We all know they are hard to stop when their tails are up and they certainly got away from us in the third quarter and we couldn’t stop them.

“We’ll just front up again on Tuesday night (training) and plan for this weekend’s game (against Frankston YCW),” Murphy said.

Despite the loss, Seaford remains in the top five, a game clear of Mt Eliza.

The Redlegs failed its second big test in as many weeks when it was thrashed by Bonbeach at Shark Park.

Coming off a horrible loss against Frankston YCW the week before, the Redlegs would have been looking for some redemption on Saturday, however, they were never in the contest.

The Sharks too were coming off two horrible losses and needed to make a statement. They did, jumping out of the blocks with 10 scoring shots to five in the opening quarter and claiming a 28-point lead at the halfway point of the match. The final margin was 25 points after Mt Eliza kicked six goals to four in the last quarter.

Owen Hulett bagged five for the winners and Jackson Casey and Dylan Jones were both at their best through the middle of the ground.

In better news for the Redlegs, Matt Lillie was back in the reserves after quite a lay-off.

The big question for Pines on Saturday against Frankston YCW was how were they going to go without star forward and the competition’s leading goal kicker Aaron Edwards?

The answer; 11 scoring shots and just six goals against the best defence in the competition.

With Tim Bongetti well beaten by BJ Credlin, the Pythons looked vulnerable in attack and struggled to impact the scoreboard.

At the other end, Josh Butland booted five goals and teenager Luke Paynter three majors as the Stonecats flexed their muscles and won 14.11 (95) to 6.5 (41).

Brad Kiely was the best of the Pythons with a couple of goals and Paul Scanlon worked hard through the middle of the ground.

The Kangas led at half time by three points but were outscored six goals to two in the second half to remain on the bottom of the ladder without a single win for the season.

The Langwarrin FC is the envy of many given its junior base, however, it is just a shadow of what it should be. With ‘review’ being the buzz word around footy clubs at the top level right now, perhaps it’s time this takes place at Langwarrin FC both on and off the field.

The Bulls worked hard. Cal Dixon was superb for the winners and Andrew McInnes played arguably his best game since crossing from Carlton.

Three weeks ago, after losing to Mt Eliza, the season of Edithvale-Aspendale appeared to be over.

Fast forward and the Eagles have won their past two matches are now a game clear in the top bracket.

Tim Mannix was the best player on the ground while Mick Meehan, Michael Bussey and Tom Burley booted three goals each. Bussey has only played two games this season, both against Chelsea, and has dominated each time.
Simon Mitchelhill and Todd Gardiner were the best of the Gulls.