Without Edwards, Pythons lose their power 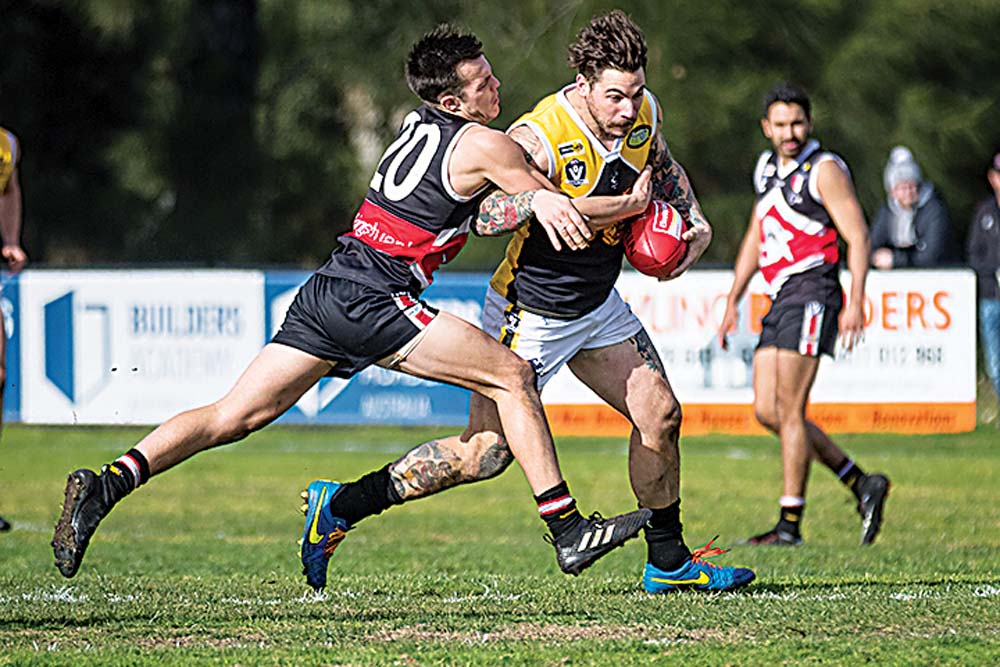 PINES has lost four games on the trot in MPNFL Peninsula Division and is now in danger of missing the top five all together.

After sitting a game clear at the top of the table at the midway mark of the season, the Pythons have fallen in a slump, generating the obvious question, ‘is it a case of no Aaron Edwards, no Pines’?

While the brainstrust at Pines will have you believe that this isn’t the case, the fact is that Pines has not been able to win a match since the best forward in the game went down with a season-ending knee injury four weeks ago against Langwarrin.

On that day against the Kangas, Dale Tedge went to full forward, booted a handful and the Pythons had a strong win.

On the back of that, coach Pat Swayne said team structures would stand up and while Aaron was a great player, there were other avenues to explore that could fill the void.

We all love Swayne’s optimism, however, we all know that that is just smoke and mirrors.

This leaves the 2016 league MVP Tim Bongetti one out down there.

Mornington coach Chris Holcombe said on the RPP Footy Show on Saturday morning that Pines were ‘kidding themselves’ if they believed Edwards not playing wouldn’t have an effect.

“He’s a star and they are a much better team with him there. They stretch defences. Of course he’s a massive loss and there’s little point denying it,” Holcombe said.

Chelsea coach Brett Dunne agreed. “They’ll need to look at the way they are using Guy (Hendry) and see if they can push him forward,” Dunne said.

“It’s nice to have him playing as a defender but they need him playing forward to help Bongetti,” Dunne said.

On Saturday Pines was beaten by Seaford by a goal, which kept Seaford’s finals’ hopes alive.

Frankston YCW flexed its muscles and restricted Bonbeach to just five goals on their own turf.

The Sharks were held to just one goal in the first half but had a strong third quarter and found themselves just eight points down at the last change.

The Bulls led by three points at half time before the Redlegs booted 10 goals to six after the change.

Karl Lombardozzi was superb for the winners while Dan Gormley was at his best with three goals.

Langwarrin came back to earth with a thud, smashed by Edithvale-Aspendale, who are now a game clear in third place.

The Kangas were held goalless in the opening half before completely dominating play in the third quarter and booting 5.10 to 3.1. It should have been 10.5.

Warwick Miller was a star for the Dogs again with four goals while Dave Willett booted four also for the Gulls.

Mornington is on the look out for a new coach after Chris Holcombe told the club he couldn’t commit the time next season.