Lifesavers recognised for dedicating their lives 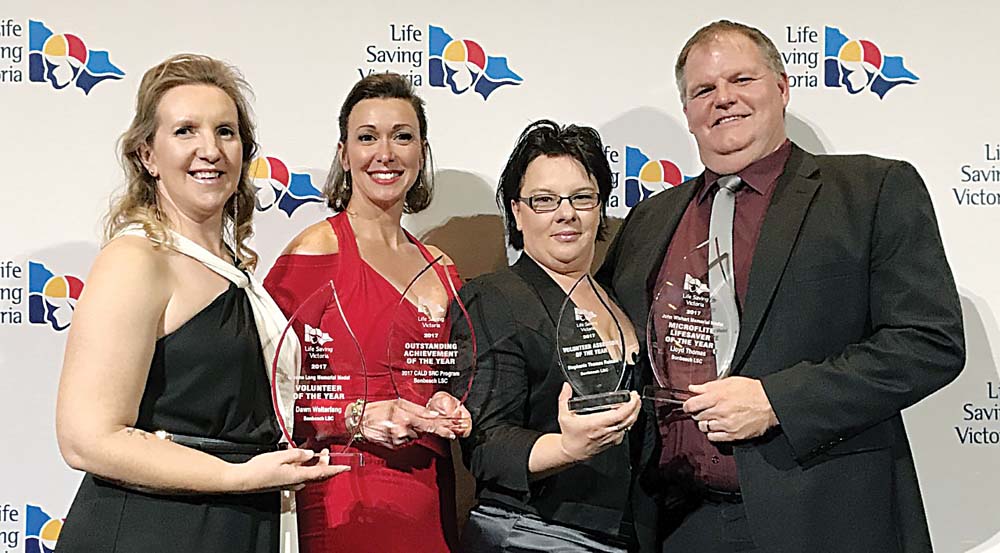 MEMBERS of the lifesaving and aquatic community from the Mornington Peninsula were awarded for their dedication to saving lives at the 14th annual Life Saving Victoria Award of Excellence on Saturday 29 July.

Bonbeach Life Saving Club collected three of the four major awards with Lloyd Thomas from Bonbeach LSC being awarded the John Wishart Memorial Medal as Lifesaver of the Year for his ‘outstanding contribution to lifesaving’.

Bonbeach LSC was also presented with Outstanding Achievement of the Year for their 2017 CALD Surf Rescue Certificate Program, the Volunteer Assessor of the Year which was awarded to Stephanie Thomas Reindel and the Volunteer of the Year award which went to Dawn Walterfang.

President’s Certificates were presented to Joshua Ritchie-Crichton from Gunnamatta SLSC and Kieran Hanley from Rosebud and McCrae LSC for helping save the life of a man who suffered a heart attack at a cricket match earlier this year.

Greg Schmidt of Mentone SLSC was the recipient for the Nipper Program Volunteer of the Year, and Mount Martha LSC was awarded the Patrol Efficiency Club of the Year.

Life Saving Victoria’s President, Tom Mollenkopf, paid tribute to the nominees and winners for their ongoing commitment to the lifesaving movement.

“This special event recognises and celebrates the exceptional achievements our dedicated volunteers, staff, and members of the broader aquatic community make throughout the year,” he said.

“Everyone in the organisation takes great pride in the work they carry out, and this is a wonderful way to acknowledge those who go above and beyond to contribute to all aspects of lifesaving in Victoria.”