Redlegs win after siren and move into five 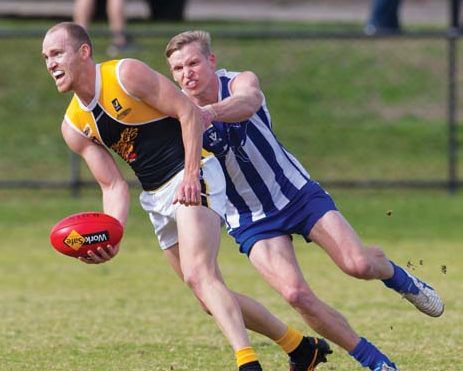 MT ELIZA moved back inside the top five in MPNFL Peninsula Division on Sunday after an after-the-siren victory against Mornington at Alexandra Park.

James Hammond took a wonderful pack park in the goal square with just seconds on the clock and then went back and converted after the siren to hand the Redlegs a five point win.

Despite the fact that an inexperienced, more committed Mornington side appeared the better side all afternoon, Mt Eliza always seemed to have the answers at the right time.

Warwick Miller was clearly the most influential and best player on the ground with seven goals for Mornington but it wasn’t enough to claim the victory.

The Redlegs are now inside the top five by less than two per cent, pushing Seaford out of the top bracket.

In the final game of the season, Seaford plays Bonbeach at Bonbeach while Mt Eliza hosts bottom of the ladder Langwarrin.

The final five is now set.

It what was a critical game for Seaford against Edithvale-Aspendale at home on Saturday.

The loss dropped the Tigers out of the top five, equal on points with Mt Eliza by two percent in arrears.

The Tigers lost the game with a poor first quarter, down by 31 points at the first change.

They rallied until the end but once again the Eagles showed they are true contenders for the title.

Charlie Martello snagged four for the winners and Jeremy Heys and Timmy Mannix were superb.

Curtus Murfett, Rourke Fischer and Damian Rayson were superb for the Tigers.

The Pythons seemed to have lost their way since star Aaron Edwards went down with a knee injury but they regained their mojo on Saturday.

Pythons coach Pat Swayne said on the RPP Footy Show on Saturday morning that his side had been maintaining its standards in every area, other than conversion.

“Aaron was converting his opportunities in front of goal at 87 per cent – that’s ridiculous accuracy,” Swayne said.

“We have been right there in our losses and all of our other key performance indicators like contested footy, inside 50’s etc have been consistent all season. It was just that conversion that was hurting us.

“Against Seaford last week we had our chances but booted 1.5 and two out-of-bounds on the full. You can’t win games with that return,” Swayne said.

It’s conversion as pretty good on Saturday, booting 18 of 30 opportunities at goal. More impressively, Pines had 10 contributors on the scoreboard.

Despite the loss, it’s been an exciting week for the Seagulls with Brett Dunne handing over the coaching reigns to James Brain in 2018. Dunne has done a superb job with the club since taking over as coach and has provided great stability after having five coaches in five seasons. He has been well-supported by the hard working executive and committee at the club also.

Current Mordialloc-Braeside Under 17 coach Dan Knopers will take over the Gull’s Under 19s next season in another exciting development or the club.

More exciting news at Karingal too with Michael Burke declaring he will go around again next season to celebrate the new social rooms and of course be around to help celebrate the 300th game of great mate Luke VanRaay, who is missing at the moment with a knee injury. Burke, who is tipped to win his 10th club best and fairest this season, is showing no signs of slowing down.

Hodson booted five majors and was the best player on the ground in what was Craig Nankervis’ 250th game for the club. Nankervis was only the seventh player in the club’s history to play 250 games.

Nick Tuddenham and Michael Parker were the best of the Kangas.