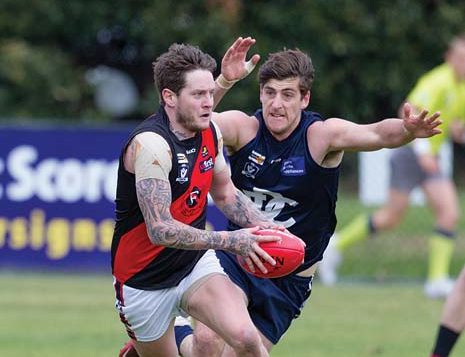 ROSEBUD will play Sorrento for the second time in three weeks this Saturday in the second semi-final after beating Frankston comfortably in the Nepean Division Qualifying Final.

There was a significant wind advantage to the Kars St end of Frankston Park, Rosebud kicking three goals against it and Frankston just one.

It was Rosebud’s work rate and dare to take a risk that saw it boot two vital goals against the breeze in the third quarter, which ultimately won it the game.

It again highlighted how strong Frankston was offensively, however, also exposed its inability to defend.

This played into Rosebud’s hands, using its powerful, structured and disciplined team defence to lock the ball in its attacking half of the ground.

Rosebud booted three goals in the first five minutes of the second quarter with accelerating ball movement, which clearly rattled the Bombers.

The Buds had contributors and winners all over the ground too. Frankston did not.

Dale Sutton was superb for Frankston and worked tirelessly, while Jason Kingsbury had 20-odd touches through the middle too. Ryan Marks-Logan held up in defence.

It was an incredibly puzzling move by Frankston to play Allan Williams on Rosebud star Keegan Downie. Downie booted six goals and was one of his team’s best. We know Frankston like to free up the likes of Marks-Logan, Amalfi and Corey Buchan, but this was a coaching move that went incredibly wrong. In anyone’s book, you play your best defender on the opposition’s best forward. It was a move, or lack of one, that contributed greatly to end the result.

Rosebud dominated the ruck yet again, Ben Dwyer providing his smalls with first use of the footy, in the centre bounces and around the ground.

Sean Downie, despite getting a lot of treatment, including off the ball, was simply exhilarating for the Buds, gathering 24 disposals and booting two goals, both of them sensational. Jake Corrin was superb also, his tackling a feature. He hurt his ankle in the third but should come-up this week.

Best on ground was Jackson McRae, who completely dominated Frankston coach Beau Muston. Muston booted three goals, however, all three were lucky ones over the back after McRae attacked the footy. Mind you, two of Beau’s goals were 50m specials.

Before the game it was always going to be a case of defence versus attack. The better defence usually wins finals.

Frankston’s cause wasn’t helped when Sam Fox copped a cork early in the match and didn’t spend much time on the ground after that and Muston had his left hamstring iced and taped at the end of the game. The Bombers’ said it was precautionary but when the game was in the balance in the last, Muston was sitting on the bench!

Hastings has beaten Red Hill in an Elimination Final for the second year in succession.

Shaun Foster was significant in the win with three goals while David Hirst kicked a couple.

The Blues will tackle Frankston Bombers at Devon Meadows this Sunday.