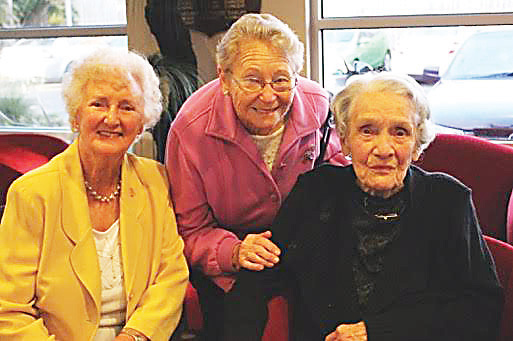 EIGHTY friends and family from all parts of Victoria and interstate gathered at Rye RSL recently for a surprise party to celebrate Meryl Taylor’s 100th Birthday.

Born in Torrita, a small farming town north-west of Ouyen in the Mallee, Ms Taylor was the first child of pioneers Heber and Doris Smith. She has outlived her four siblings.

She attended the local one-room school where her mother was the teacher. After leaving school she trained as a nurse at the Ouyen Hospital and, after the war, moved to Maryborough in central Victoria  with her husband Victor, a New Guinea veteran, and sons Graham and Ken. She nursed at the local hospital for 15 years.

After moving to Northcote in 1962 Ms Taylor nursed at the Vaucluse Hospital in Preston before moving to Rye upon retirement in 1984.

Mr Taylor died in 2000 after a long illness, while Ms Taylor continued living at home with son Ken. She enjoys reading and gardening, drawing and watercolour painting – and following the fortunes of the Carlton Football Club. She is a keen member of Rye Bowling Club.

Ms Taylor has four grandchildren and five great-grandchildren. Her many nieces and nephews comment that she never misses sending birthday and Christmas cards to each of them, and takes a keen interest in all their lives.

In a short speech Ms Taylor thanked everyone for making it such a special day, and said that she was very proud of the fact that “I still know what I am talking about”.