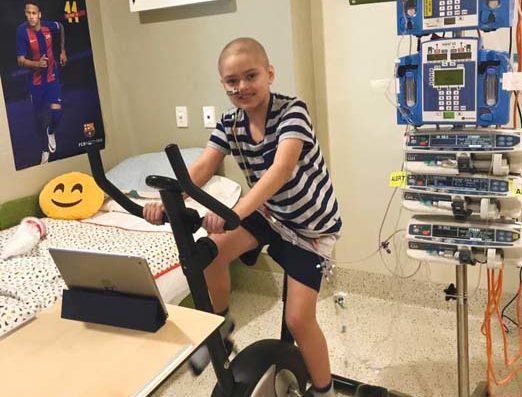 THE Better Tennis community donned footy guernseys last week in support of one of their junior players who earlier this year was diagnosed with leukaemia.

Combining with their ‘Epic Rally Week’ fundraiser and the Fight Cancer Foundation’s ‘Footy Colours Week’, Better Tennis raised more than $5000 in support of eight-year-old Dzan Tanovic, with more donations to be counted.

Tanovic was diagnosed with acute lymphoblastic leukaemia in February and has been in hospital ever since undergoing bone marrow transplants.

“We had a tennis lesson on a Thursday early in the year where he looked a bit fatigued but I just put it down to him starting back at school,” he said.

“He came back the following day and looked a little worse. You could tell he just wasn’t himself.”

The next week Tanovic was diagnosed with the cancer.

Laird said Tanovic had always been a strong boy but “you wouldn’t even be able to tell what Dzan has been going through if you didn’t know otherwise”.

“I talked to him on Tuesday and he seems like he’s coping pretty well – he’s a super tough kid,” Laird said. “It’s great to see the whole community getting behind him.

“I’ve coached him since he was in prep and he really is one of the keenest kids I have taught.”

Footy guernseys were worn throughout the week with many juniors wearing them during their lessons at both the Mt Eliza Tennis Club and Frankston Tennis Club.

Better Tennis hope the funds will help with his recovery and see him back of the court in no time.