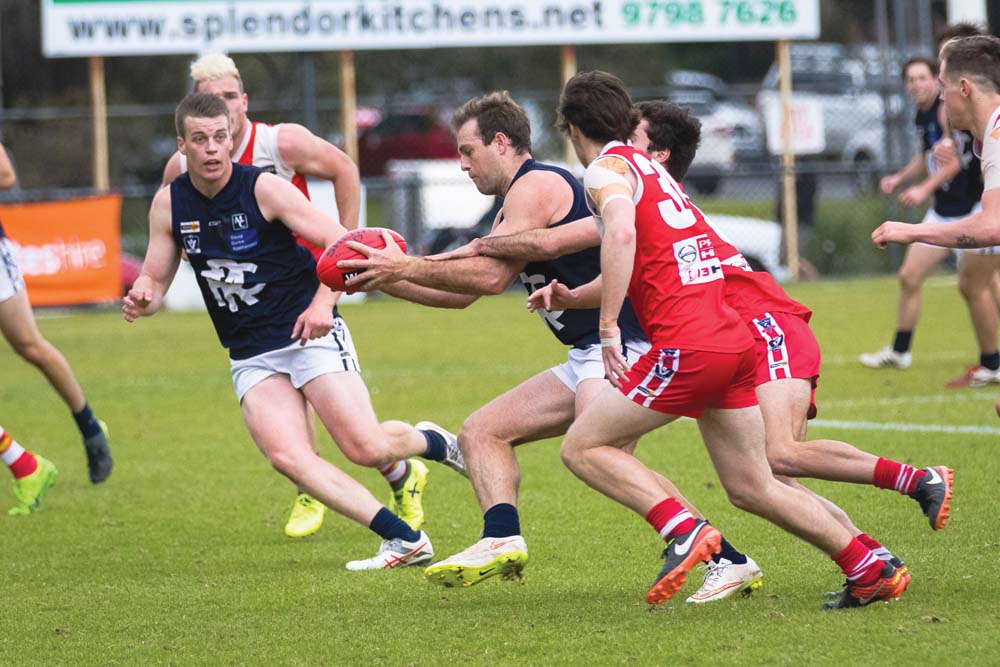 SORRENTO stormed into the 2017 MPNFL Nepean Division grand final on Saturday with a crushing victory over Rosebud.

Kicking with the aid of a five goal breeze in the opening quarter, the Sharks put Rosebud to the sword early, kicking its first goal inside 30 seconds from the first bounce and finishing the quarter with eight.

One Sorrento supporter said at the first change; “I wish it was a grand final, we could have a few beers now”, while a second supporter said “I think this is the best side I have seen in all of my time at the club.”

To make matters worse for Rosebud, star youngster Daniel Wilson popped a shoulder and was taken to hospital at quarter time.

The Sharks made five changes to the team that lost to Rosebud in the final home and away game of the season. Collingwood premiership player Chris Dawes, star key back Aaron Paxton, dependable defender Ryan Potter and exciting youngsters Zac Byrns and Chad Harris all came into the team.

Luke Tapscott absolutely dominated in the middle of the ground, along with skipper James Hallahan. They were given first use of the footy from Ryan Williams, who had the better of Ben Dwyer in the ruck.

Absolute talent aside, the Sharks attack of the footy was ferocious and Rosebud was under enormous pressure from the first bounce.

Skipper James Hallahan said on the RPP Footy Show before the game that his side was “jumping out of its skin to play”. There was certainly plenty of evidence in that.

Rosebud finished with 4.7 (31) to Sorrento’s 18.14 (122). Jake Corrin booted two goals for the Buds and was his side’s best player, along with Sean Downie, while Lachy Mew did a great job on Corp and Tommy Stoffels took another major step in his development. Bart Wallace also did a good job on Dawes after he booted three first-quarter goals.

Rosebud coach Adrian McBean said before the game that his side would find it tough with Jackson McRae (hamstring) not playing.

“Jackson not coming up wasn’t great timing given Dawes came back in,” McBean said.

Rosebud will play Frankston Bombers in the Preliminary Final on Saturday at Frankston Park after the Bombers crushed Hastings by more than 10 goals, 14.17 (101) to 4.7 (31).

Jason Kingsbury was the best player on the ground for the Bombers with five goals.

It was Hastings premiership coach Brendan Dunne’s last day at the helm with Ricky Ferraro taking over in 2018.