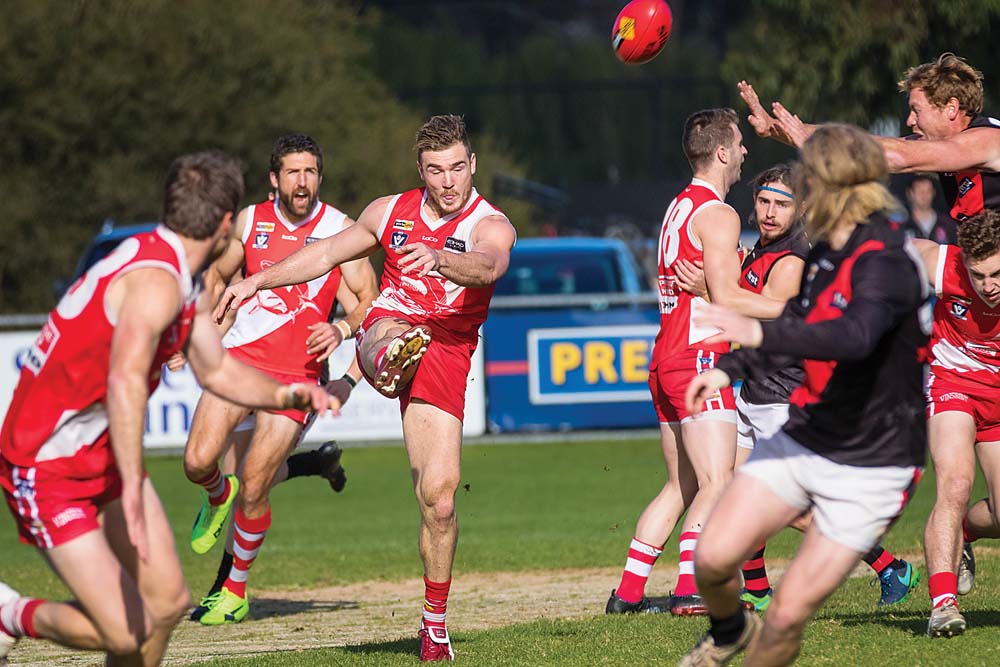 FRANKSTON Bombers will play Sorrento in the 2017 MPNFL Nepean Division Grand Final this Saturday at Frankston Park after beating Rosebud by three goals.

In a tight and highly contested affair, there was very little in the game all afternoon in terms of the scoreboard but Frankston always seemed to have the edge, eventually winning 10.11 (71) to 8.5 (53).

There were no goals kicked in the opening 12 minutes of the game, such was the contest.

However, goals to Lachy Mew and Keegan Downie saw Rosebud take a five-point lead into the first change.

Frankston took the ascendancy in the second quarter but failed to make the opposition pay on the scoreboard, finishing the quarter with 2.5 to 1.1.

The second half was very much like the first, contested footy with the battle of defences.

Jarryd Amalfi and best on ground Ryan Marks-Logan dominated across half back for the Bombers while Jackson McRae and Brenton Davidge had the better of Beau Muston and Zac Longham respectively.

Frankston defender Corey Buchan got the job on Keegan Downie and kept him to two goals.

Unfortunately for Rosebud, there wasn’t another forward that even looked likely to take a mark and kick a goal.

The Buds’ decision making taking the ball forward was also questionable, as it kicked to unmarked opposition players consistently.

Ruckmen Ben Dwyer and Ryan Kitchen broke even for the first three quarters, before Kitchen left the field in the third quarter with a hamstring injury and didn’t reappear.

With the game absolutely in the balance in the last quarter and Dwyer dominating Corey Micari, the fact that Kitchen didn’t come back onto the ground provides enormous doubt over his availability in the Grand Final this week.

The game was always going to be won and lost through the middle and it was Frankston’s depth of rotations through this part of the ground that won out.

Matt Harris was superb, Mitch Bosward and league medal winner Jason Kingsbury were outstanding and Dale Sutton and Alex Harnett were amongst the best players on the park.

Sean Downie was magnificent for the Buds and Jack Jarman played his best final, however, the depth beyond that was not there.