Stonecats aim for five in row 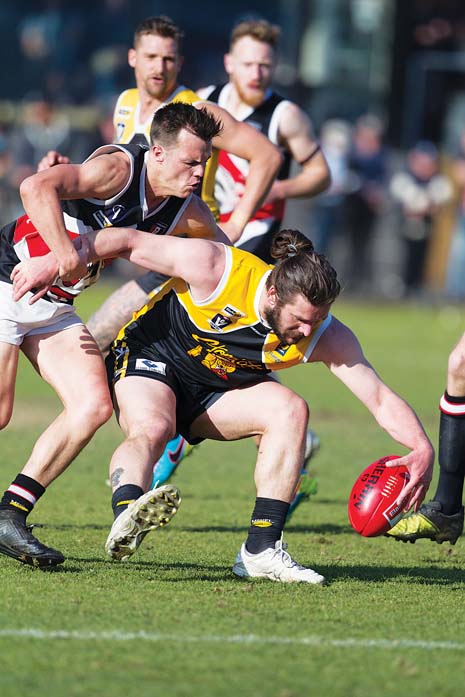 WITH the 2017 MPNFL Peninsula Division season now behind us, clubs will now turn their attention to the arduous task of locking away coaches and recruiting.

Here’s a sneak peek at what clubs should focus their attention on in preparation for 2018.

Whilst AFL South East is yet to hand down its decision on the format of the MPNFL next season, it’s expected that Chelsea, Karingal and Langwarrin will play in MPNFL Division Two next season.

Frankston YCW: The Stonecats again proved that they are the benchmark of the competition. Once again in the silly season, clubs will go after their stars. However, why would you leave? Four straight premierships says the Stonecave is the place to be. At age 38, even Ash Eames proved that you can be at your best if managed well. There are no obvious deficiencies that need rectifying.

Bonbeach: The Sharks desperately need some more leg speed in the middle of the ground and another key forward to help out Trent Dennis-Lane. Owen Hulett said himself he prefers to play in defence and with him down there with Douglas, Sole, Carpenter and co, that area of the ground looks OK. The Sharks have the grunt in the middle but need speed. Another target higher up the ground in attack is required.

Edithvale-Aspendale: The Eagles need another key defender to assist Mark Mullins. Brent Bowden being injured didn’t help in attack, however, with Meehan and Bussey, as well as Bowden, offensively they look sound.

A few of the young forwards, including the likes of Flavelle, need to take the next step and become midfielders. The likes of Heyes and Tim Mannix need some assistance.

Pines: The Pythons will obviously get back Aaron Edwards in the second half of the season and they’ll be thereabouts. They also get Saad who signed with them mid this season with a view to playing in 2018.

The ruck looks solid with Dylan Smilie continuing to develop. Some genuine leg speed through the middle would be handy with Potts and Scanlon better suited to do the grunt work. Getting another key defender would allow Guy Hendry to become a very damaging swing player.

Mt Eliza: All eyes will be on Mt Eliza. If you believe the rumours, the likes of Grant Goodall and Justin Van Unen are out of there and there are some other players who are a little disgruntled, given the club has tightened its purse strings. What they will be left with though are the blokes that are committed to the club and buy into what the club stands for and where it wants to go. Perhaps a step back to take a step forward.

Seaford: The Tigers will be feeling like they underachieved in 2017 and that an opportunity to play finals went begging. What they did show though is that their best is good enough against all of the best sides in the competition. A ruckman will be number one on the shopping list, while a key forward capable of booting 65-plus goals would be handy also. The Tigers aren’t far away.

Mornington: The Doggies will be buoyed by the fact that Simon Goosey is back at the helm. The club has an abundance of good junior talent who former coach Chris Holcombe gave plenty of opportunities to. Goosey should be able to take that to another level given his elite program experience and ability to teach young players to play his way. You can guarantee that ‘Goose’ will bring in a few new faces also.

Karingal: There will be plenty of excitement around the Bulls in 2018, given its new state-of-the-art facility will be unveiled at Ballam Park and they will be in a different, more competitive division for them. New coach Brett Dunne will engage and excite the more experienced players while teaching, guiding and inspiring the young talent. There will be some new faces too, which will see the Bulls be very competitive.

Chelsea: The Gulls get to experience a new coach in 2018 under quality on-field performer James Brain. The Gulls made terrific inroads in 2017 and can only improve next season in Division Two. Its best was very competitive this season but the problem was sustainability, both in games and across the season.

Langwarrin: Langwarrin needs a coach first and foremost. Someone with a profile to recruit some players and make the club relevant again. Someone who will gain the immediate respect of the senior players and inspire, teach and guide the kids. Clubs are circling the Kangas and they get just one chance of getting the decision right. A wrong decision and the club will trend further south.