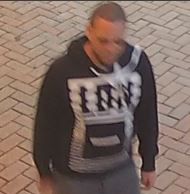 Police are investigating the circumstances surrounding an aggravated carjacking in Rye last week.

Investigators have been told a man was walking back to his van which was parked on Ozone Street on Monday 9 October about 7.50pm.

The 25-year-old was about to get into the vehicle when he was approached by a man who was armed with a knife.

The offender then drove off in the victim’s white Toyota Hiace, registration ZAS213.

It is believed the same offender had minutes earlier been involved in an attempted carjacking nearby.

A 19-year-old woman was seated in a white hatch on Point Nepean Road, between Napier and Lyons streets, when she was approached by the man.

He didn’t produce a weapon on this occasion and no one was injured during either of the incidents.

The man is perceived to be of Caucasian appearance and about 183cm tall with a stocky build, tanned complexion, dark hair and stubble.

It is understood he was wearing jeans, runners and a dark-coloured hoodie with a white motif on the front.

Police have released CCTV and images of a man who they believe may be able to assist them with their enquiries.

Anyone with any information is urged to contact Crime Stoppers on 1800 333 000 or submit a confidential crime report at www.crimestoppersvic.com.au