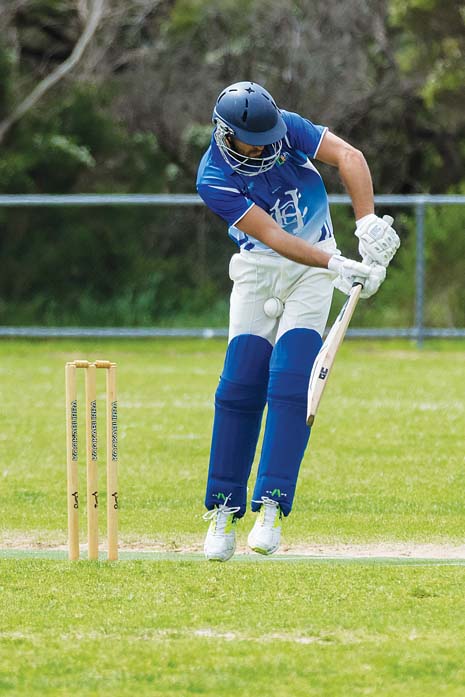 HASTINGS is the only side in MPCA District without a win this season after losing to Mt Martha on Saturday.

The Blues have had a tough start to the year in its opening three one-day games and Saturday was no easier.

Winning the toss and batting first, the Blues made 8/129 from its 40 overs.

Rob Hearn top scored with 35 and opening partner Nathan Hunt contributed 27. Sean Hewitt then made 24, however, losing 4/17 in the middle order cost the visitors.

Steve O’Neill was the best of the bowlers for the Reds with 3/34.

In reply, although shaky, Mt Martha got there in the end, eight wickets down and with one over to spare.

Baden Powell remains the only undefeated side in the competition after a solid victory against Heatherhill.

The Braves were sent in to bat and made 9/152 from its allotted overs, skipper Craig Entwhistle top scoring with 35 and Rhys Elmi contributing 31.

Brett Maxwell was the best of the Hills’ bowlers with 3/30 from eight overs.

In reply, the Hills were never in the hunt, despite 32 runs from Kristian Miller. They were bowled out in the 38th over.

Elmi backed-up his batting performance with some magic with the ball, snaring 4/19 from 7.2 overs, while Michael Ballard picked-up 3/20.

Rosebud won a cliffhanger against Seaford Tigers, winning by just one run.

The Tigers didn’t look like they did enough after being bowled out for 126 in the 39th over. Billy Quigley took 3/29 for the Buds while Anthony Joel top scored with 28 for the Tigers.

The Buds then lost 4/11 before Mathers got his side over the line in the final over, finishing at 8/127.

Rye is in the top four after knocking over Seaford.

The Demons batted first and it was Andrew Hitchener (35) and skipper Matt Whelan (61no) who helped the home team to 6/150.

The Demons’ bowlers then got to work and restricted the visitors to 8/144 from 40 overs. Whelan backed up his match-winning batting performance with 2/13 from eight overs with the ball.