Second rally to save pets 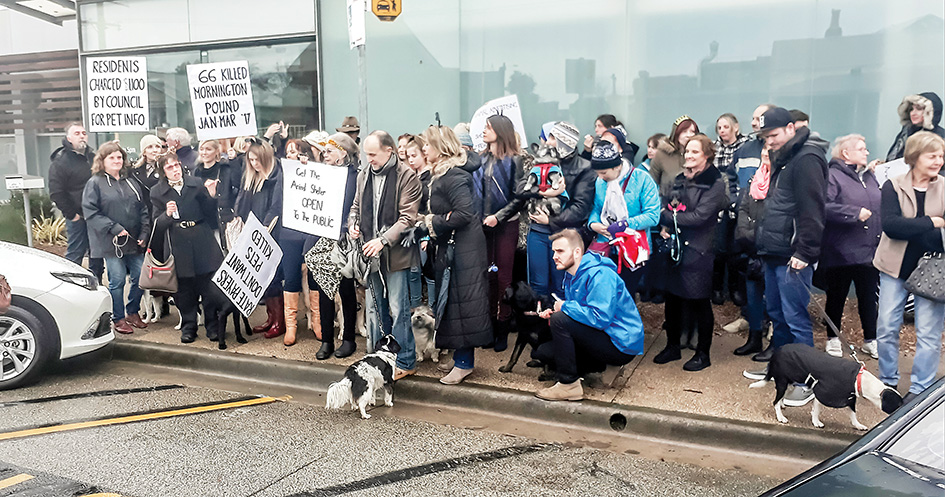 A SECOND rally to Save Mornington Pound Animals’ Lives will be held outside the Mornington Shire Offices, Queen St, later this month.

The first rally in July attracted 70 people, several dogs and one cat.

The rally aims to make the Community Animal Shelter and Pound in Watt Rd a no-kill facility; to increase pet adoption rates and to compel the pound to open to the public without an appointment at least three hours each day.

Organiser Rosy Fischer said the rally would push for the pound to list animals for adoption on Petrescue, in local newspapers, libraries and on social media

She said a crucial improvement would be to simplify the adoption process whereby a potential pet owner “doesn’t have to email back and forth prior to visiting the pound to arrange a time to visit”.

In a bid to improve its services the pound began a trial opening to the public for three hours on Saturday mornings in August but is closed to visits at other times unless by appointment. This is seen as a stumbling block to public access.

“Nothing much has changed since they commenced the Saturday open hours,” Ms Fischer said.

“Very few animals are being listed for adoption despite lots being impounded, and the adoption rates have actually gone down since they started their open hours on Saturday.”

The mayor Cr Bev Colomb said the shelter cared for 685 cats and 994 dogs last year, with those sick or injured being treated. All animals were photographed for identification as well as a place on the mornpen.vic.gov.au/lostpets page.

She said pets also received a second microchip scan, and had their eating, toiletry habits and behaviour monitored and recorded, and given an individual health-management plan.

The mayor said the shelter last year returned more than 800 pets to their owners, usually within 24-36 hours. A further 573 were rescued or adopted by volunteer animal rescue groups.

The council spent about $900,000 upgrading facilities at the pound earlier this year, including a bigger reunite area; heated and cooled housing for pets awaiting one of the 50-plus rescue groups or direct adoption, and a new direct adoption area.