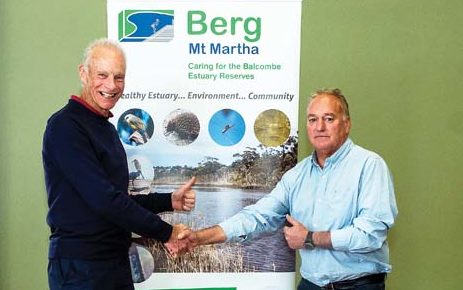 ENVIRONMENTAL group BERG Mt Martha is celebrating what it regards as a “vital step”, in conjunction with Mornington Peninsula Shire, in preserving the Balcombe Estuary reserve.

The group has drawn up a case for an environmental significance overlay (ESO) which it says will give greater protection to the 76 hectares.

Over the past 18 months the group has been preparing documents and meeting with shire officers to outline the need for the overlay.

The shire’s backing was announced at the group’s recent annual meeting, but members were told there was “still a long way to go before the state government signs off on it”, by president Graham Hubbard.

A consultant to be appointed as part of a shire planning scheme review will look at the application of the overlay and make recommendations for council to consider.

“Rapid urbanisation of the peninsula, along with state government planning changes, has highlighted the need to protect environmentally significant and vulnerable areas in the estuary,” committee member Peter McMahon told The News.

“Our remaining areas of natural bushland are extraordinarily precious and require all the means we can muster to protect them.”

Over the past 20 years the environment group has concentrated on removing weeds and replanting indigenous species at the Balcombe Estuary reserves which are regarded as being of regional to state significance, based on the significant diverse flora and fauna they support, and their high habitat value.

The discussion paper noted that the area was of cultural significance: the Bunurong, traditional owners of the land, called the Balcombe Creek area Tji’tjin’garook (the voice of frogs). Areas designated of Aboriginal cultural heritage sensitivity almost completely covered the reserves and coastline.

The paper referred to diversity of flora and fauna, educational and scientific significance, feeding and breeding of local waterbirds, filtering water flowing in the bay and the area as a tourist attraction.

The mayor Cr Bev Colomb, who attended the meeting with fellow Briars Councillor Sam Hearn, congratulated BERG MM for its work. She said she would attend future talks between the group and council officers in support of the planning amendment.