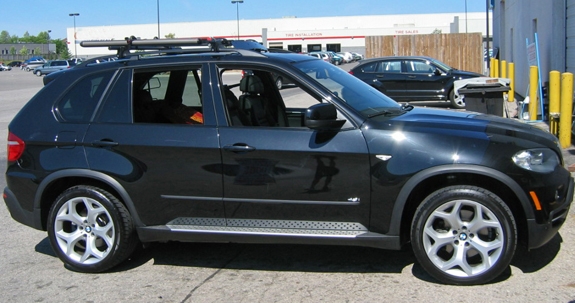 Police are searching for a number of people following an aggravated burglary in Bittern this morning.

It is believed three males attended a premises on Stony Point Road just after 3.30am and accessed a backyard in an attempt to gain entry to a shed.

When confronted by the occupant, one of the men produced a firearm before the group fled.

No shots were fired and no injuries reported.

While en route, police observed a dark BMW believed to be carrying the same group.

A short pursuit was initiated but soon terminated when police lost sight of the car.

The vehicle was last seen on the Western Port Highway, Somerville.

At this stage, police believe the vehicle may be linked to an incident in Carrum Downs yesterday morning, where two police cars were rammed in the car park of a fast food restaurant.

The investigation is ongoing.

Police have released an image of a car similar to the vehicle involved in the incidents.

It is likely to have extensive damage to the rear.

Anyone with information or who may have sighted the vehicle is urged to contact Crime Stoppers on 1800 333 000 or submit a confidential report at www.crimestoppersvic.com.au