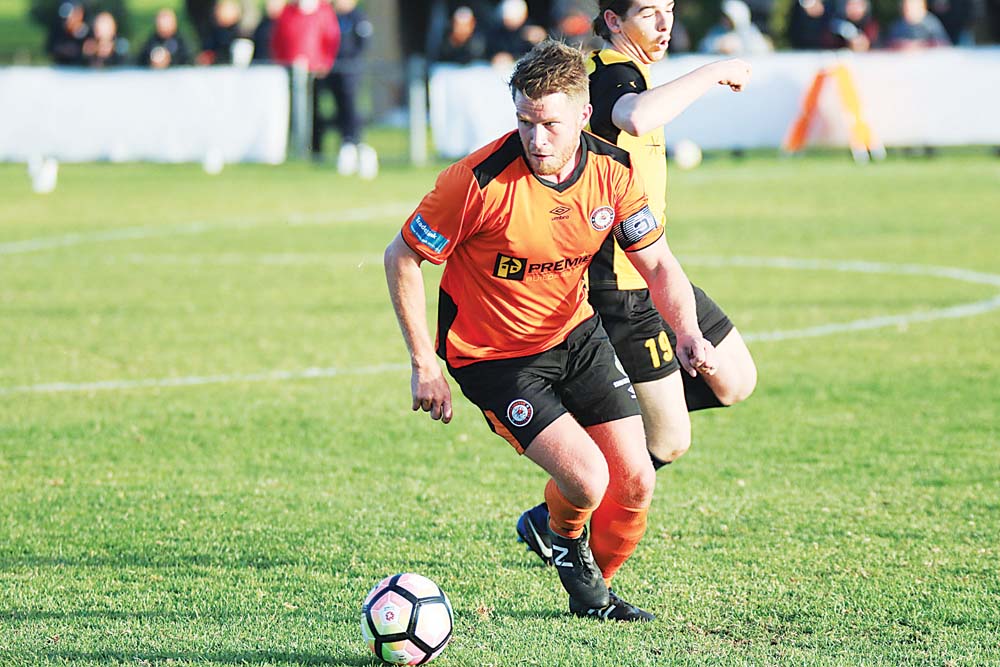 LUCAS Elliott is just a fortnight old but Mornington fans owe the infant a debt of gratitude for the part he played in his father re-signing with the club last week.

Stevie Elliott is a class act, one of the finest central defenders outside NPL ranks and for the past two months the word was that his switch to Langwarrin was all but done and dusted.

Until last Thursday when the 29-year-old Englishman ended a 45-minute meeting with Mornington gaffer Adam Jamieson and assistant coach Dale White by re-committing to the club for a fourth straight season.

“At the back end of last season I was out of the team and we needed to clear the air,” Elliott said.

“Langwarrin never actually put an offer down but there was a lot of conversation.

“I was almost in limbo there for a while because although I believed that I could make the step up (to NPL) I didn’t think I could commit to the three or four times a week that they’d want you in.

“I felt it was unfair to my partner (Sarah) and my new son to not be around for that length of time.”

Season 2017 was far from plain sailing for Elliott who struggled to overcome a medial ligament strain incurred in a round 13 clash at Elwood Park against St Kilda.

“I went to run the ball out of play in the last few minutes when one of their players came in to the side of my hip and pushed my knee out and strained the medial,” Elliott said.

“It was frustrating and it sort of epitomised the season for me.

“We’d started off with a whole bunch of new players and it was pretty unsettling when players were injured and Simon Webster retired.

“When I did come back the boys were doing well and you don’t expect to walk back into a winning side but I was very frustrated.

“Coming off the bench against Caulfield and scoring the winner was pretty good but missing out on the derby against Langwarrin the following week was the low point.

“I had to question whether or not my heart was in it and I’ll admit that I started wondering whether Mornington was for me.”

If Elliott had any lingering doubts they were erased at last week’s meeting when Jamieson and White outlined their plans for 2018.

“They ran through a list of players they’ve spoken to and it sounds exciting.

“If we give it a good crack I don’t see why we can’t go all the way next year.”

“We needed to have a chat and lay everything on the table and make sure we go after some unfinished business,” Jamieson said.

“Stevie said Mornington soccer club is his home and that’s why he wanted to stay with us.

“A fit Stevie Elliott is just about the best defender in the league.”

Elliott has won two championships in his three seasons with Mornington.

Hailing from Brighton on England’s south coast he played with clubs in Lewes and Hastings before joining Eastbourne Town.

He arrived in Melbourne in November 2014 and rode his bicycle down to Dallas Brooks Park to check out the local club.

He was given the thumbs up to train and offered terms after just two sessions.

His impact was immediate. He won the players’ player of the year and best and fairest awards in his first season as Mornington captured the first of back-to-back titles in State 1 South-East.

“I pretty much hit the ground running when I first came out here and that’s what I need to do again,” said Elliott.

“I need to have a good pre-season and if I’m fit I’ve got no doubts that Mornington will see that same Steve Elliott again.”

Mornington could make another key signing this week with a leading NPL player among the club’s targets.

Last week the club announced the appointment of Serhat Ozenir as technical director.

Ozenir has an AFC A licence and has been involved with both men’s and women’s soccer at junior and senior levels and has had stints at Monash Uni, Sandringham, Dingley Stars, Brighton, Beaumaris and Eltham.

Beck expects some players from Seaford at Baxter training this week as his rebuilding program with the senior squad gains momentum.