Call to make a point 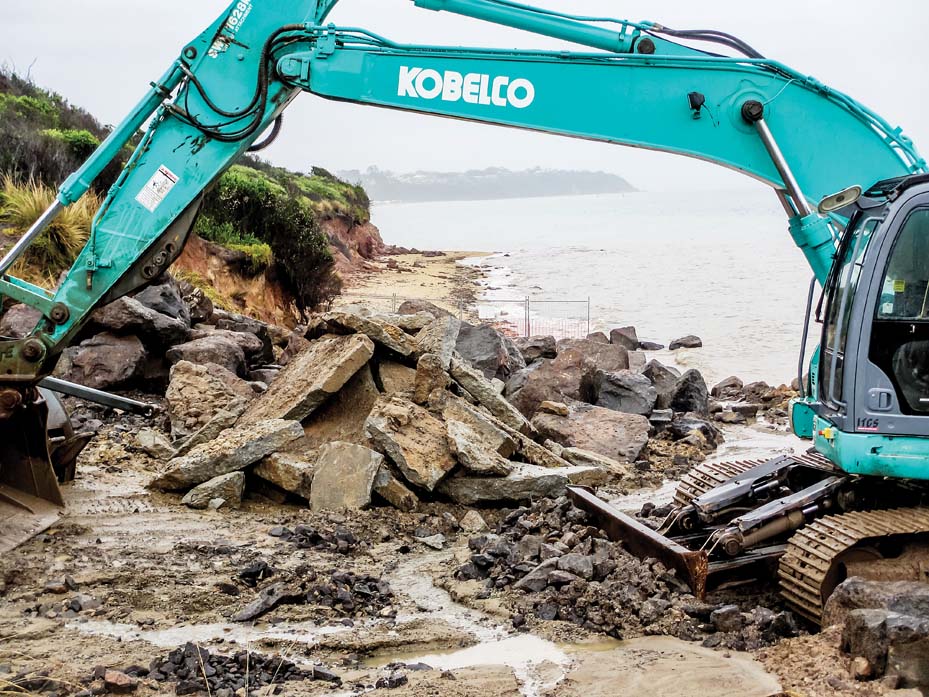 BEACH box owners and users of Mt Martha Beach North want the state government to pay about $30,000 for a “modelling” of a plan to save the eroded beach.

A public meeting at Mt Martha Lifesaving Club  (Saturday 25 November) called on the government to  more fully investigate building a 25 metre long groyne designed to bring sand back to the beach and protect the crumbling cliffs.

Land and built environment program manager for the Department of Environment, Land, Water and Planning, Cass Philippou, said on Friday the proposal “is currently being considered”.

“Construction of a rock revetment to stabilise the cliff at Mt Martha North beach is a high priority for DELWP,” Ms Philippou said.

A study by consultants Water Technology estimates the groyne – either made from rocks or “geotextile” bags – will cost $330,000, including initially importing sand to renew the beach.

The beach users are facing a summer where the beach remains closed for safety reasons.

Meanwhile, the owners of beach boxes ordered demolished by Mornington Peninsula Shire cannot comply because of the closure.

Alan Farquhar, chairman of the Mt Martha North Beach Group, said 12,500 cubic metres of sand trucked onto the beach (mainly from the beach at Mt Martha south) in 2010 had lasted three years “when they told us it would be there for eight or 10 years”.

Without any other physical changes “the sand has no chance of being retained”.

Mr Farquhar says a rocky point at the northern end of the beach once formed a “natural groyne” but had “gradually worn away”.

He said building a 25 metre long groyne would replace the point and hopefully cause the sand to build-up which, in turn, would protect the base of the cliffs. What changes could be expected from rocks now being installed at the base of the seawall at Hawker beach “is not generally known, but is likely to be beneficial”, Mr Farquhar said.

“But the problem is not to be solved without further human intervention.”

Mr Farquhar said there was “no market” for the beach boxes, which could not be accessed by their owners.

The Water Technology study into erosion at Mt Martha Beach North was commissioned on the back of two severe storms in winter 2016.

A major finding is that that the crumbling cliffs threaten the stability of the Esplanade.

Options for stopping the erosion and renewing the beach outlined in the report cost up to $4 million, with the 25 metre groyne being among the cheapest.

However, the consultants’ say “a key issue” of the groyne is that it will cause sand to be lost from Hawker beach. The consultants say a “soft option” would be to construct the groyne from geotextile bags which could be easily removed it more erosion was caused.

The report recommends removing all the beach boxes unless action is taken to stop further erosion of the cliff and beach.

The options include building rock walls and groynes across the beach or an offshore breakwater to slow the loss of thousands of cubic metres of sand needed to “renourish” the beach.