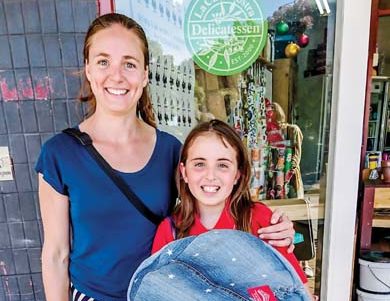 THE campaign to rid the Mornington Peninsula of plastic bags is being made easier by the work of volunteers who make Boomerang bags.

The workers were eager participants at a presentation at La Casa Nostra deli, Rosebud, on Thursday, to celebrate the 1000th bag made since Rosebud Boomerang Bags was launched on 1 July.

Organiser Gwen Giudici said the actual number of bags was 1168 bags – the making of which had diverted 42,138kg of waste from going to landfill.

“This [the making of the bags] has brought the community together and created awareness as more people are bringing their own bags into the shop,” Ms Giudici said.

“Lots of sweat, laughs and tears got us to 1000th bag which was presented to Cr Antonella Celi. She’s been involved from day one: She joined in with sewing at the Tuesday bee, was pivotal in securing council funding of $4000 to educate our community and $5000 for establishing hubs.

“Another amazing woman is Susan Tomasello: She talks the project up, converts die-hard plastic bag users, recruits sewers, cuts – is there anything she doesn’t do?”

A silent auction for a Boomerang Bag Ottoman was won by 11-year-old Kiera Matthews, of Sorrento Primary, who recited a poem about pollution. The Ottoman was filled with fabric scraps from sewing bees and home sewing. This aims to keep the group as close to zero waste as possible.

As a thank-you the volunteers were presented with mugs saying “I’m a Rosebud bag lady”.

Ms Giudici said a Tuesday bee was about to start at Seawinds Community Hub on space donated by CEO Heather Barton.