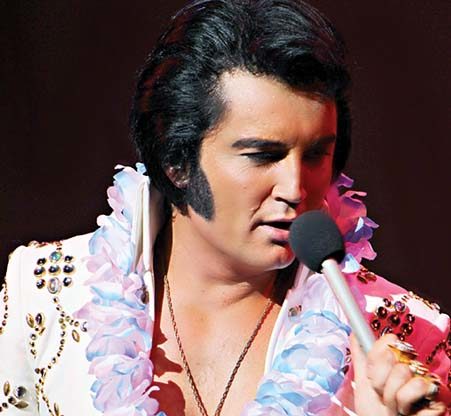 ELVIS is on the way to Frankston in the form of Ben Portsmouth, officially crowned the king of The King tribute singers by Elvis Presley Enterprises six years ago.

Portsmouth, from Berkshire in the UK, shook up the world of Elvis performers by being the first non-American to take out the Ultimate Elvis crown in Memphis in 2012.

The singer’s success in the contest led to an appearance on The Late Show with David Letterman to perform An American Trilogy.

“It was an incredible opportunity to do that on such a big show,” Portsmouth told The Times.

He is bringing his Taking Care of Elvis show to Frankston Arts Centre on Thursday 25 January.

The singer was honoured to win the Ultimate Elvis accolade despite hailing from Old Blighty.

“Obviously Elvis is an American icon but I think as long as you do a half-decent respectful job the fans like you.”

The Taking Care of Elvis show takes the audience on the journey through The King’s career from starting out in the 1950s at Sun Studios through major life events including Elvis joining the US Army, his mother dying and meeting wife Priscilla Presley.

The two-hour-plus show also features songs from the Elvis-starring movies, the ‘68 Comeback Special and his 1970s live concerts in Las Vegas.

“My favourite era is the 70s,” Portsmouth said.

“I think the music was better, his voice had matured and it was really just the climax of his career.”

The Berkshire lad has been hitting the road as Elvis for the past decade and says his father’s love for his music sparked initial interest in The King.

“My dad listened to Elvis when I was a child in the car. There was a guitar in the house, and unbeknownst to my dad because I was quite rebellious, I didn’t want to admit to my day that I liked Elvis so I’d be out in the garden with a tape on and picked up a guitar and try to learn the chords. That’s how it all started.”

The good-humoured Brit says he does not take offence being called an “Elvis impersonator”, regarded as a slur by some diehard Elvis fans.

Portsmouth is looking forward to visiting Frankston for the first time as a stop on the national Taking Care of Elvis tour.

“I’m sure it’ll be a great night. I feed off the audience so it’s going to be an electric atmosphere.”