All aboard as ferry gets terminal nod 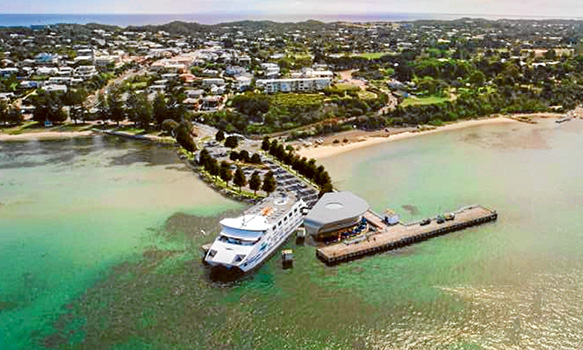 SEAROAD Ferries last week got the go ahead to build a new terminal at Sorrento.

Mornington Peninsula Shire Council on Tuesday 13 February approved the works following public exhibition of the plans and review by an independent panel.

The terminal will include a maritime museum, café and lounge, toilets and small shops for souvenirs and ticketing.

He said the works would improve infrastructure along the Esplanade and Sorrento foreshore and lead to better connections with public transport.

“We are also determined to improve safety and pedestrian access to the pier, including access for older people and people with disabilities that affect mobility,” he said.

Mr McDonald sees the terminal as a “significant economic driver for the region … [The] route from Queenscliff to Sorrento carries more than 850,000 people and 200,000 cars each year, making it the busiest passenger ferry service in Australia,” he said.

“We must provide tourists and locals who use the service with high quality, safe and accessible facilities.”

He said terminal improvements were also planned for the western side of the ferry route, with a proposal being considered by the Borough of Queenscliffe.

“The total project will provide an economic boost for the Mornington and Bellarine peninsulas generating 155 direct and 50 indirect jobs during the construction phase,” Mr McDonald said.

“Independent modelling estimates that from 2015-30, the upgrades would create a total economic impact of $210.8 million. This is enough to support 1097 jobs.”