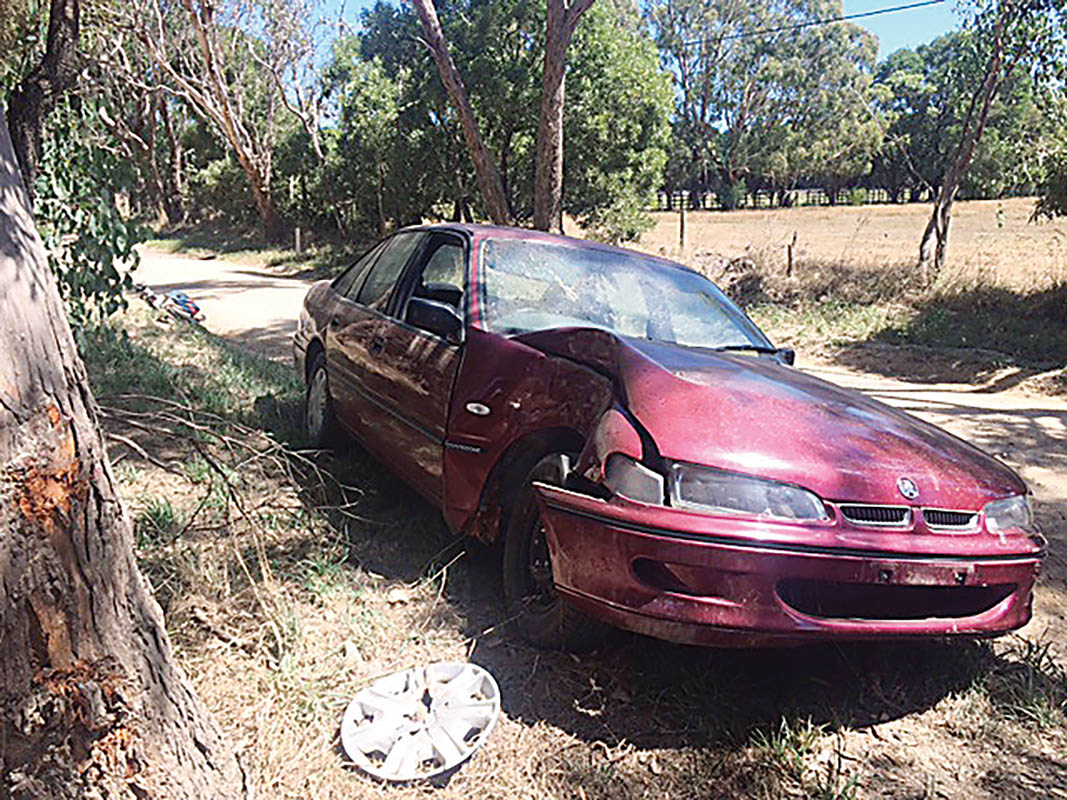 Crash test: This car was left smashed at the side Stumpy Gully Road, Bittern just hours after a councillor-residents meeting was "showered by stones" on the same stretch of unmade road. Picture: Supplied
Share
Facebook Twitter LinkedIn Pinterest Email

STATE MPs are being asked to back moves to have uniform speed limits on all the Mornington Peninsula roads.

Cr David Gill says a piecemeal approach to speed limits sees 80kph in some sealed roads while unmade roads “have a default 100kph”.

Most of the 570 roads within the shire having at least one section of unsealed road operating under the 100kph default speed limit.

“Mornington Peninsula Shire Council was the first council to officially join the [state government’s Toward Zero] campaign, yet there is still no overall road safety plan for the peninsula,” Cr Gill said.

“We are ideally placed on a peninsula for a trial of a modern traffic and road management plan that could be the template for a realistic road toll campaign in rural Victoria.

“The deputy commissioner of police-traffic said on an official visit to the shire last year that allowed speeds were a serious problem on the peninsula.”

Then anomaly of high speeds on unmade roads was graphically illustrated to Cr Gill when meeting with ratepayers on the side of Stumpy Gully Road, Balnarring on 7 February to discuss a drainage issue.

“We were showered with stones and saw dangerous speeding drivers, even when we were standing on the side of the road,” he said.

“Many of these motorists were not driving at an appropriate speed, as VicRoads suggest will happen on unsigned roads. This same location had yet another car run off the road and into a tree just hours after our resident discussion.”

Cr Gill said there had been three recent crashes in Stumpy Gully Road, although none had been reported to police as no one had been injured.

“This is an unsealed road with a de facto 100kph speed limit,” Cr Gill said.

“The default speed limit of 100kph on most of our 330 kilometres of gravel roads is causing concern in our community. Living and driving along these roads is hazardous as country lanes have grown into thoroughfares.

“The situation of sealed roads like Bungower Road and Balnarring Road being 80kph and dangerous gravel cross roads left at 90 or 100kph is difficult to comprehend.

“VicRoads controls these speeds, they have a one size fits all protocol that deny sensible safety outcomes on the peninsula.

“The piecemeal approach, even down to speed changes on the same rural road – probably due to several accidents in one location – seems to me to be counterproductive to the rationale of the government’s Toward Zero campaign.”

Meanwhile, the shire has given the go ahead to a roundabout being built at the intersection of Bentons, Derril and Loders roads, Moorooduc. The federal government has contributed $950,000 towards the roundabout.

“Analysis in this area has highlighted the intersection has a high crash history. At this intersection, there have been two recorded crashes in the last five years,” a shire news release states.

After inquiries by The News, infrastructure strategy and climate change executive manager Davey Smith said injuries were sustained in the two crashes at the intersection.

“At the shire, we are working towards safer roads and roadsides, safer speeds, safer vehicles and safer road use in our commitment as a Towards Zero municipality. We take all crashes seriously to ensure our road network is safe for our residents,” Mr Smith said.

Traffic will be disrupted for up to three months during construction.

The mayor Cr Bryan Payne said the shire spends about $8.9 million a year on its 1700 kilometre road network.