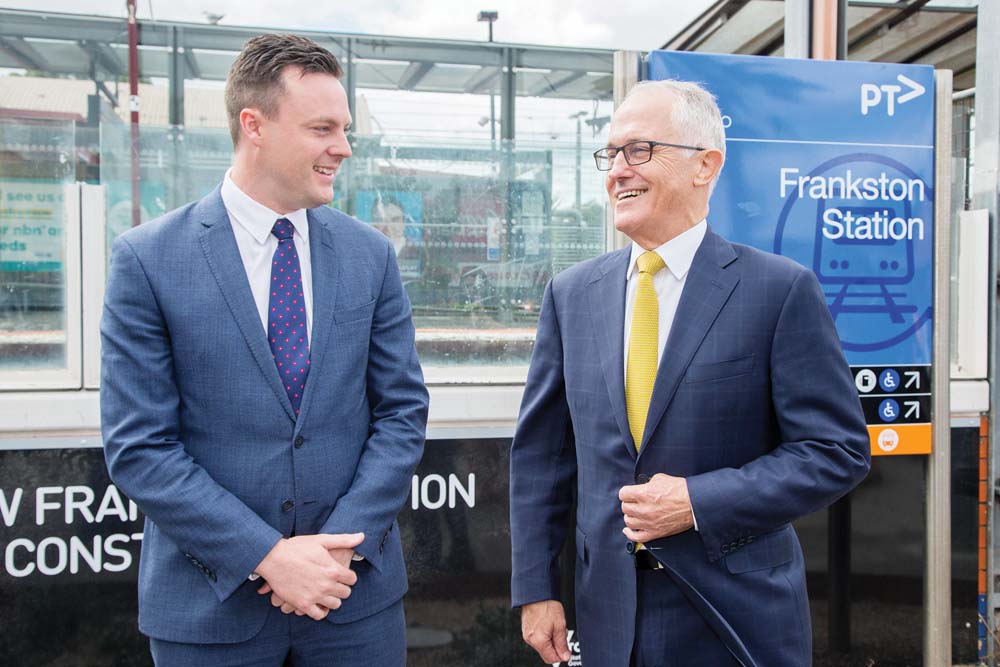 On front foot: Prime Minister Malcolm Turnbull had a brief respite from being asked questions about the Liberal Party’s inability to give Nationals Party coalition colleague Deputy Prime Minister Barnaby Joyce the boot after a tumultuous fortnight in Canberra. The political capital has been rocked by revelations of taxpayer-funded jobs last year for a previously undeclared female partner of the deputy. Picture: Gary Sissons
Share
Facebook Twitter LinkedIn Pinterest Email

FRANKSTON train station was a honeypot for politicians on both sides of the political spectrum last Monday (19 February).

The Prime Minister Malcolm Turnbull turned up at the station about half an hour after Victorian Transport Minister Jacinta Allan dropped by to announce the awarding of a tender as part of the Labor state government’s $63 million station precinct redevelopment project.

Most people walking past on the streets of Frankston seemed non-plussed by Mr Turnbull’s declaration that he was there to announce “a business case for the electrification of the Frankston line to Baxter”.

His 15-minute visit to central Frankston followed an hour or so at Mornington business, Bata Shoes.

“He was in town to look at Bata Shoes and local manufacturing and talk about the need for growth in manufacturing,” Mr Crewther said after the visit.

“He was at Frankston train station to talk about the Baxter electrification project and our support for that. We’ve signed off on that project already, so we’re waiting on the state government to tender it out.”

The federal government committed $4 million towards a business case study to make the case for the electrification of the rail line to Baxter.

“We’re calling on the state government to cost it out because we want it costed out before the state election,” Mr Crewther said.

“If we don’t get it scoped before the state election there’s going to be no funding committed by the state opposition or the state government.”

Ms Allan announced a construction partnership between KBR and John Holland to redevelop Frankston train station based on designs by Genton Architecture.

“This new station will be bigger and better than before,” she said in a statement. “It will be a community centre Frankston can be proud of.”

Frankston Labor MP Paul Edbrooke, also at the station with the state transport minister last Monday, took to social media after the Prime Minister’s visit to note Mr Turnbull made no federal funding announcements while in Frankston and “urging” the state govern-ment to partly fund major projects.

“State Labor govt invests $200 plus million in Frankston without any matching investment from the PM and Federal Libs who are still ‘urging’ …. Thanks for nothing Turnbull,” Mr Edbrooke tweeted.

The station will be closed from mid-year while the rebuild is underway and replacement buses will shuttle commuters.