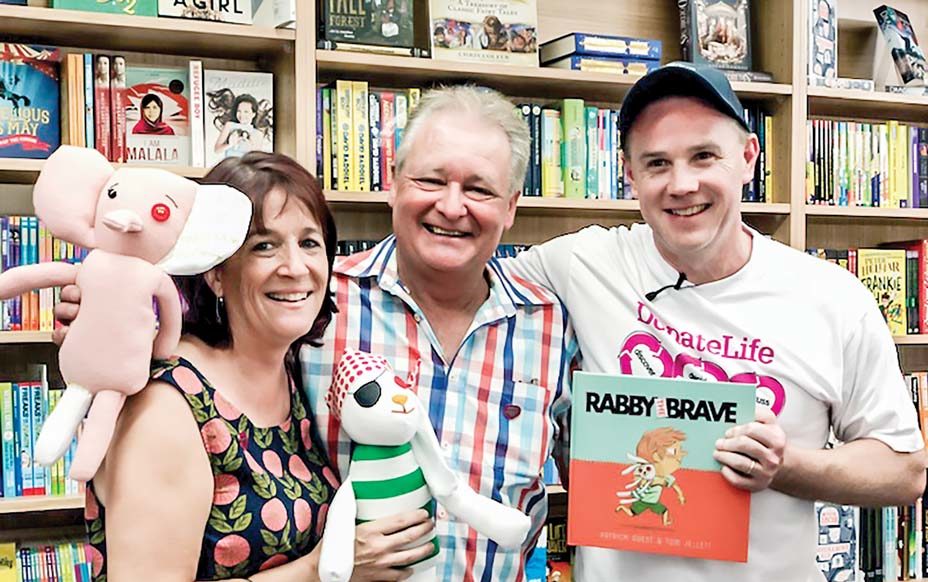 A BOOK launched in Mornington last week comes about after a chat between an author and a Main Street book seller.

Patrick Guest got the idea for his children’s book Rabby the Brave from a conversation he had with Ann Briggs, who has worked at Farrell’s bookshop for the past six years.

While chatting, Ms Brigg’s revealed she was soon to have a “small surgical procedure”. Being naturally curious, Mr Guest asked what it was all about and was told she was getting ready to donate a kidney to her husband, Garry, whose kidney function had fallen by 93 per cent.

Five years before, Mr Guest’s brother Bryan had died suddenly – but after earlier agreeing to donate his organs. Guest family members have been strong supporters of organ and tissue donations ever since.

Patrick Guest’s latest work focuses on two soft toys belonging to siblings Leon and Lily: Rabby the rabbit and Snuggles the elephant. In the story, Snuggles is inadvertently left in the rain causing him to lose an ear and damage his leg. After a sleepless night, Rabby and Leon decide to help Snuggles by donating an ear and a leg – and Captain Rabby the Pirate is born.

The story is described as a warm-hearted take on living organ donation and generosity in the face of adversity.

It’s also relevant to the 148 deceased Victorian organ donors who have helped transform the lives of 389 grateful recipients: the highest number in any state. A further 273 living donors across Australia have provided partial liver and kidney transplants to 273 recipients, like Garry.

The Australian Organ Donor Register is at donatelife.gov.au

The book is available at Farrell’s Bookshop. Illustrations are by Tom Jellett.